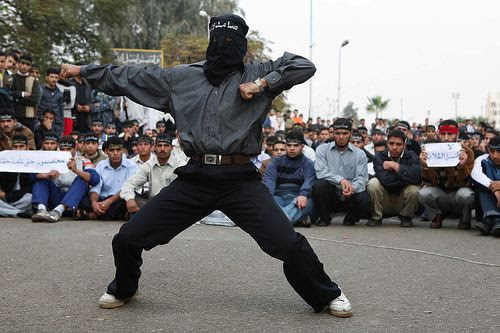 Why do I think the result, no matter what it is, will not mimic Jefferson et al?

A number of police members removed their suits and joined protests against the regime, according to Al Arabiya.

The crowd threw stones at police lines and shouted slogans against President Hosni Mubarak, 82, and his son, Gamal, 47, who many Egyptian believe is being groomed for future office.

Media in the Arab world are generally reporting cautiously on the protests rocking Egypt following the shakeup in Tunisia, but those in Iran are giving the turmoil prominent, almost gleeful, coverage.

Sunni Egypt, viewed as the leader of the Arab world, and Shi’ite Iran are longstanding rivals.

Iranian outlets, especially those linked to the government and establishment, are using terms like “revolution” and “uprising” to describe the protests, painting the demonstrators as heroic and giving headline treatment to voices predicting the downfall of President Hosni Mubarak.

Which the US went out of it’s way to stay out of.

Whatever the right move is doesn’t matter because the Obama admin is a paralyzed Hamlet party, afraid to even soliloquize

This is the beginning of the Great Polarization that will eventually lead to WWIII. The whole of North Africa will become a militantly theocratic Caliphate and will form the nucleus for a united Dar al-Islam in mortal conflict with Dar al-Harb.

The division between Dar al-Islam and Dar al-Harb will become as stark and hostile as between NATO and the Warsaw Pact at the height of the Cold War.

We can only hope.