The Muslim Brotherhood in Egypt calls for war with the tiny Jewish state. What better way to unify the ummah than with tried-and-true, religiously mandated Islamic anti-semitism?

For all of those quisling clowns desperately trying to scrub the Muslim Brotherhood, here is a good hard slap in the face. Further, it's interesting how the Muslim Brotherhood blames Israel for Mubarak's regime. Not the $300 billion the US has pumped into Egypt. The peace accord (no matter how cold) was a good thing. Now we hear that Obama's would-be peace partners, Muslim Brotherhood's Hamas, are going to destroy the accord. But they want peace with the Jews; get it? Me neither.

Obama has been secretly supporting this revolution for three years. Why? He ignored the people of Iran marching against the annihilationist mullahcracy of Iran. He gave his tacit support to mass slaughter where millions took to the streets.

Anyone who sees this as a good thing secretly dreams of the annihilation of Israel. Big media is not giving you the story. Instead they have the Muslim Brotherhood's US group on, CAIR, calling in from Egypt (and mis-identifying Ahmed Rehab of CAIR as a "democracy activist"). And that was FOX. It's that bad.

Obama's hard left operatives, like frequent White House visitor CODE PINK, are in Egypt now. Coincidence? Methinks not. I don't believe Obama "lost Egypt"; I believe he kicked it to the curb.

Mohamed Ghanem, one of the leaders of the Muslim Brotherhood in Egypt, calls Egypt to stop pumping gas to Israel and prepare the Egyptian army for a war with it’s eastern neighbor.

There are doubts about the loyalty of the Egyptian army to president Mubarak. If the brotherhood takes control over Egypt, it will be very messy from the whole region.

Iran is the mullah behind then curtain: (from IBT)

Iran's Press TV claimed on Monday Israel is giving weapons to Egypt to prop up the Hosni Mubarak regime which is engulfed in crisis and appearing to inch towards doom as violent popular protests gained momentum.

The Press TV said reports "followed phone conversations between the US, Egyptian and Israeli defense ministers."

"Israel has provided the Egyptian government with weapons amid the country's popular uprising demanding the ouster of President Hosni Mubarak, reports say," the Press TV report said on Monday. However, the Press TV report doesn't give further details, nor say clearly how it got the news of Israeli arms supply to Egypt. It however refers to an earlier Washington Post report which quoted an Israeli cabinet minister as saying that Mubarak will eventually tide over the present crisis.

The violent demonstrations, which entered the seventh day on Monday, have forced the Mubarak regime to deploy the military to quell the uprising. The CNN reported on Sunday that Egyptian defense minister Mohamad Tantawi asked the public to obey the curfew. The demonstrators are bracing for a military crackdown of protestors in major Egyptian cities under the curfew.

UPDATE: NYC: "Long Live the Egyptian Intifada" "Down with the Camp David Accord Regime"

UPDATE: And check out the protests in Canada.

Photo: Protest at UN this past weekend 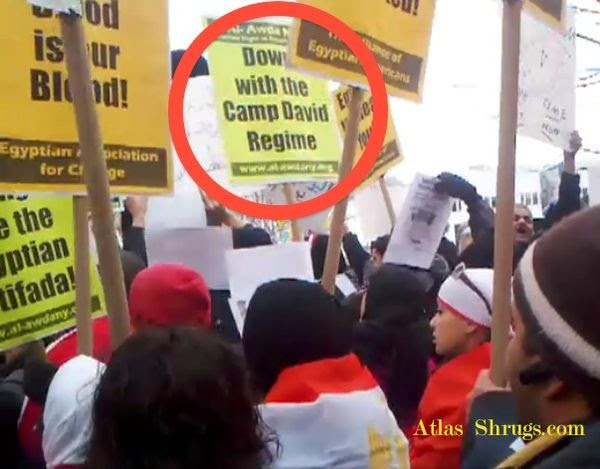 UPDATE: The Muslim Brotherhood chess board:

Egypt's Muslim Brotherhood Backs ElBaradei Role - Margaret Coker and Summer Said Egypt's Muslim Brotherhood has agreed to back the secular, liberal opposition leader Mohammed ElBaradei, 68, as lead spokesman for the country's opposition groups in reform negotiations, suggesting the movement may be positioning itself as a significant political actor in future Egyptian politics. (Wall Street Journal)  See also ElBaradei Doesn't Like America - Michael Ledeen Mohammed ElBaradei is one of the last men I would choose for leading Egypt to a "peaceful transition" to greater democracy. He doesn't like America and he's in cahoots with Iran and the Muslim Brotherhood. (Pajamas Media)

Israel Shaken as Turbulence Rocks an Ally - Ethan Bronner Israel's military planning relies on peace with Egypt; nearly half the natural gas it uses is imported from Egypt; and Prime Minister Benjamin Netanyahu has met with President Hosni Mubarak of Egypt more than with any other foreign leader, except President Obama. "For the United States, Egypt is the keystone of its Middle East policy," a senior Israeli official said. "For Israel, it's the whole arch."  Israelis worry that a successful overthrow in Egypt could spread to Jordan. And if the Muslim Brotherhood were to gain power in Egypt, that would probably mean not only a stronger Islamist force in Gaza but also in the West Bank, as well as in Jordan, meaning Israel would feel surrounded in a way it has not in decades.  If Egypt also turned unfriendly, that would quite likely stop in its tracks any further Israeli talk of peace negotiations with the Palestinians, officials and analysts said. There has long been concern that popular sentiment in Egypt is anti-Israel. Eli Shaked, a former Israeli ambassador to Cairo, wrote in Yediot Ahronot, "The only people in Egypt who are committed to peace are the people in Mubarak's inner circle, and if the next president is not one of them, we are going to be in trouble."  Giora Eiland, a former national security adviser and a senior fellow at the Institute for National Security Studies at Tel Aviv University, said even if Egypt did not cancel its peace treaty with Israel tomorrow or in five years, a government dominated by the Muslim Brotherhood would mean "you can't exclude the possibility of a war with Egypt." (New York Times)  See also Israel: Ties with Egypt Must Be Preserved - Matti Friedman Israeli Prime Minister Benjamin Netanyahu said Sunday that his government is "anxiously monitoring" the political unrest in Egypt. "Israel and Egypt have been at peace for more than three decades and our objective is to ensure that these ties be preserved," he said. If Egypt resumes its conflict with Israel, Israelis fear, it will put a powerful Western-armed military on the side of Israel's enemies.  "Israel has an interest in Egypt being democratic, but through a process that promises sustainability," said Dan Shueftan, director of the National Security Studies Center at Haifa University. "If you have a process that starts with a desire for democracy but then sees radicals take over, then the result at the end of the process is worse than what you had at the beginning." (AP-Washington Post)

The muslim brotherhood's positions are COMPULSORY.

Perhaps this is how it all ends.

The Muslim Brotherhood ends jihad by incineration of 25-30% of all muslims in one hour, and a slow death for the same amount over a generation.

Hopefully the spot light on the MB in Egypt will prompt our politicians to ask: "Why are we allowing MB members and sympathizers to enter and reside in the USA"?

Felix,
You're verging on the Utopian.