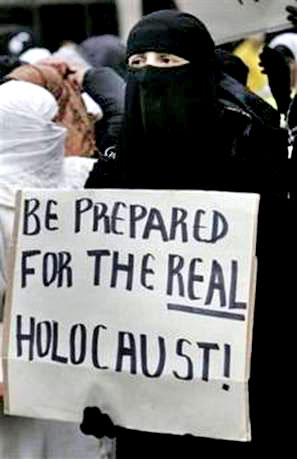 'We must succeed where Hitler failed'

The Muslims' vicious anti-Jewish enmity (see links under 'Jews - attacks on' in The Index) goes back long before the establishment of the state of Israel. In fact it goes back to the foundation of Islam by the sick, twisted pervert Mohammed.

Muslims have a binding religious obligation to completely exterminate the Jews, which is commanded by Allah and set out in the Islamic scriptures.

This enmity originated when Mohammed tried to convince the Arabian Jews that he was the real Messiah, but his knowledge of the Jewish religion was so inaccurate that they rejected him as an obvious conman and probable nutjob. Mohammed then flew into a tantrum and called for the extermination of the entire Jewish nation. Here are some examples of the genocidal Muslim scriptures and how the Muslims explain them, in their own words:


Genocidal aspect of the Global Jihad
Muslims refuse to condemn and repudiate the hadith which reads: “The prophet, prayer and peace be upon him, said: The time [of judgment] will not come until Muslims will fight the Jews and kill them; until the Jews hide behind rocks and trees, which will cry: O Muslim! There is a Jew hiding behind me, come on and kill him!” (Sahih Muslim book 41, no. 6985);
- http://www.jihadwatch.org/2008/08/usc-msa-removes-does-not-repudiate-genocidal-hadith.html 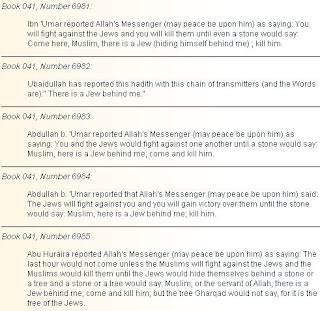 
Israel is irrelevant
"Your belief regarding the Jews should be, first, that they are infidels, and second, that they are enemies. They are enemies not because they occupied Palestine. They would have been enemies even if they did not occupy a thing. Allah said: “You shall find the strongest men in enmity to the disbelievers [sic] to be the Jews and the polytheists.”

Third, you must believe that the Jews will never stop fighting and killing us. They [fight] not for the sake of land and security, as they claim, but for the sake of their religion: “And they will not cease fighting you until they turn you back you’re your religion, if they can.”

This is it. We must believe that our fighting with the Jews is eternal, and it will not end until the final battle – and this is the fourth point. You must believe that we will fight, defeat, and annihilate them, until not a single Jew remains on the face of the Earth.
http://www.jihadwatch.org/2009/03/egyptian-cleric-the-jews-are-enemies-not-because-they-occupied-palestine-they-would-have-been-enemie.html

First the Saturday people, then the Sunday people. No unbeliever is safe.
- http://atlasshrugs2000.typepad.com/atlas_shrugs/2009/03/you-must-believe-that-we-will-fight-defeat-and-annihilate-them-until-not-a-single-jew-remains-on-the-face-of-the-earth.html

Ironically, this latest profession of Hamas's genocidal racism was preached and broadcast at the start of the month in which the UN is meeting in the "Durban II" conference in Geneva to condemn Israel as being "racist."

According to the Hamas interpretation of Islam, the Jews are inherently evil, seek to rule the world, and are a threat to Muslims and all of humanity. Therefore they are destined to extermination. In the words of Hamas religious leader Ziad Abu Alhaj, "Hatred for Muhammad and Islam is in their [Jews'] souls, they are naturally disposed to it..."

He asserts that because of the Jews' inherent evil, the Jewish state, "Israel ... is a cancer that wants to rule the world." One can find the details of the Jews' plan in The Protocols of the Elders of Zion, which he jokingly refers to as "The Protocols of the Imbeciles of Zion" (a play on words in Arabic). He concludes that the Jews are destined to be annihilated:

"The time will come, by Allah's will, when their property will be destroyed and their children will be exterminated, and no Jew or Zionist will be left on the face of this earth."
[Hamas (Al-Aqsa) TV, April 3, 2009] http://ibloga.blogspot.com/2009/04/actually-funny-imam-from-congress-of.html


"Where Hitler failed, we must succeed.”
Incidentally, this is the same man who once said: “The Jews are destined to be persecuted, humiliated, and tortured forever, and it is a Muslim duty to see to it that they reap their due. No petty arguments must be allowed to divide us. Where Hitler failed, we must succeed.” So much for "interreligious dialogue" -- the purpose of the meeting. "PA Sheikh Interrupts Pope's Speech, Slams Israel," by Maayana Miskin for Israel National News, May 11:

A senior Palestinian Authority Muslim leader interrupted a meeting of religious leaders in Jerusalem on Monday night as Pope Benedict XVI was speaking. The leader, Sheikh Tayseer al-Tamimi, began harshly criticizing Israel, and ignored calls for calm. Al-Tamimi, who heads the PA's Sharia (Muslim law) courts, accused Israel of “murdering women and children and destroying mosques” and “destroying Palestinian cities.” He also laid claim to Jerusalem as “the Palestinian people's capital,” and called on those present to “defend the Palestinians against the expropriation of their lands.”

When Tamimi finished speaking, the pope immediately left the hall. According to IDF Army Radio, the pope shook Tamimi's hand before leaving.

Gee what a surprise.
Muslims urging death to jews.

No worries, the house is surrounded by boxthorn trees