Engine on a chip promises to best the battery 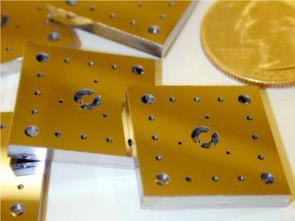 One of the components of MIT’s micro gas-turbine engine. Photo courtesy: MIT
MIT researchers are putting a tiny gas-turbine engine inside a silicon chip about the size of a quarter. The resulting device could run 10 times longer than a battery of the same weight can, powering laptops, cell phones, radios and other electronic devices.
It could also dramatically lighten the load for people who can’t connect to a power grid, including soldiers who now must carry many pounds of batteries for a three-day mission — all at a reasonable price.
The researchers say that in the long term, mass-production could bring the per-unit cost of power from microengines close to that for power from today’s large gas-turbine power plants.
END_OF_DOCUMENT_TOKEN_TO_BE_REPLACED
Posted by Pastorius at 10:34:00 pm