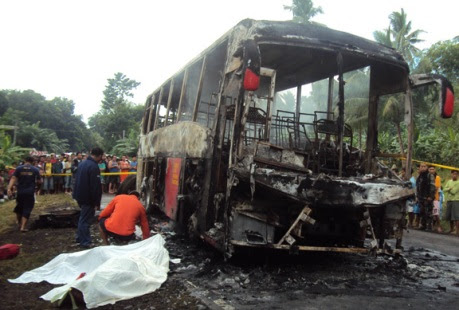 Photo of another recent bomb attack in the Philippines
From Jihad Watch:


Philippine authorities say Tuesday's deadly bomb attack on a passenger bus in Manila has the hallmarks of terrorist attacks in the nation's turbulent south.

Five people were killed and at least 13 others wounded when the bomb ripped apart a bus as it was traveling near Manila's Makati business district. The blast was so powerful it damaged a nearby concrete wall.

Officials say the remotely-detonated improvised bomb used in the attack was similar to those used by Muslim insurgents who have been fighting a decades-long battle for a separate homeland in the southern Philippines, but did not mention any specific group.