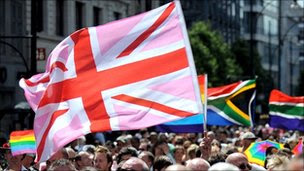 Legislation banning homophobic material was introduced in March 2010
Two men from Derby have been charged with stirring up hatred on the grounds of sexual orientation.
It is the first such prosecution since laws outlawing homophobia came into force in March 2010.

Razwan Javed, 30, and Kabir Ahmed, 27, will appear before magistrates on Friday.

The charges relate to a leaflet, The Death Penalty?, which was distributed outside the Jamia Mosque in Derby in July last year.

The leaflets were also posted through letterboxes in the city.

Mr Javed and Mr Ahmed have both been charged with distributing threatening written material intending to stir up hatred on the grounds of sexual orientation.

"We have carefully reviewed the evidence provided by the police and are satisfied that there is sufficient evidence and it is in the public interest to charge these men."
Posted by Pastorius at 1:31:00 pm

While there maybe so pretty good arguments against hate speech, at least now the UK authorities are being logically consistent. That said, I most certainly do not approve of anti gay bigotry.

I personally wonder through, how the British equivalent of CAIR will handle this. Its going to be very hard for a stealth Jihadist group to oppose this without doing one of three things. One: Condemning the very idea of hate speech laws, which could be used against them later on when they come back and demand someone be prosecuted for Islamophobia. Two: Admit that they think Islam ought to be given special treatment. Three: Reveal themselves to be homophobic.

If they do any of those things, we will be able to use it against them, regardless of the out come of this case.