Egypt protests: Clashes in Cairo on 'day of revolt

Police in Cairo have been using tear gas and water cannon to try to quell rare anti-government protests.

Thousands have joined the protests after an internet campaign inspired by the uprising in Tunisia.

They marched through Cairo and other areas chanting anti-government slogans, after activists called for a "day of revolt" in a web message.

Protests are uncommon in Egypt, which President Hosni Mubarak has ruled since 1981, tolerating little dissent.

US Secretary of State Hillary Clinton said her administration supported "the fundamental right of expression and assembly" and urged all parties "to exercise restraint".

She added that Washington believed the Egyptian government was "stable" and "looking for ways to respond to the legitimate needs and interests of the Egyptian people".

The events in Cairo were co-ordinated on a Facebook page - tens of thousands of supporters clicked on the page to say they would take part.

Reports said the social networking site Twitter had been blocked in Egypt and that mobile phone networks in the Cairo area were down.

The Swedish-based website Bambuser, which streams video from mobile phones, said it had been blocked in Egypt. On its blog, it accused Egyptian officials of trying to control the news agenda.

The BBC's Jon Leyne in Cairo said rallies had been held in several parts of the capital, and the turnout had been more than the organisers could have hoped.

Police were taken aback by the anger of the crowd and let protesters make their way to the parliament building, he says.

There police regrouped in full riot gear with tear gas and water cannon and temporarily drove the crowd back. However, protesters threw stones and stood their ground, pushing the police back until they were on the run.

Our correspondent says there was a lot of of blood but no sound of gunfire. The scale of the clashes will surely come as a shock to President Mubarak, he adds.

Protests also broke out in other areas, including the eastern city of Ismailiya and the northern port city of Alexandria.

In Alexandria, witnesses said thousands joined the protests, some chanting: "Revolution, revolution, like a volcano, against Mubarak the coward."

In Cairo's Tahrir Square, demonstrators attacked a police water cannon vehicle, opening the driver's door and ordering the man out of the vehicle.

Officers beat back protesters with batons as they tried to break the police cordons to join the main demonstration. 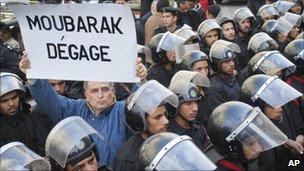 Protesters alluded to the Tunisian uprising - this one using the French word "degage", meaning "out"

One protester, 43-year-old lawyer Tareq el-Shabasi, told the Associated Press news agency: "I came here today willing to die, I have nothing to fear."

The AFP news agency reported that protesters had gathered outside the Supreme Court holding large signs that read: "Tunisia is the solution."

They then broke through lines of police and began to march through the streets, chanting: "Down with Mubarak."

Some chants referred to Mr Mubarak's son Gamal, who some analysts believe is being groomed as his father's successor. "Gamal, tell your father Egyptians hate you," they shouted.

The organisers rallied support saying the protest would focus on torture, poverty, corruption and unemployment, calling it "the beginning of the end".

"It is the end of silence, acquiescence and submission to what is happening in our country," they said in comments carried by Reuters news agency.

"It will be the start of a new page in Egypt's history - one of activism and demanding our rights."

He added: "In the end, we will get our rights because this is just the beginning.

"This will not end. Our anger will continue over the coming days. We will put forth our conditions and requests until the system responds and leaves."

Egypt has many of the same social and political problems that brought about the unrest in Tunisia - rising food prices, high unemployment and anger at official corruption.

However, the population of Egypt has a much lower level of education than Tunisia. Illiteracy is high and internet penetration is low.

There are deep frustrations in Egyptian society, our Cairo correspondent says, yet Egyptians are almost as disillusioned with the opposition as they are with the government; even the Muslim Brotherhood, the banned Islamist movement, seems rudderless.

While one opposition leader, Mohamed ElBaradei, called on Egyptians to take part in these protests, the Muslim Brotherhood has been more ambivalent.

Our correspondent adds that Egypt is widely seen to have lost power, status and prestige in the three decades of President Mubarak's rule.

They fail to mention that the Muslim Brotherhood has so far held back on joining the demonstrations.
My guess is that they are waiting for an opportune chance to do so.
A 'radicalization' of the largest Arab state in the world could have very far reaching consequences. What immediately comes to my mind is a serious weakening of the Saudi/American position and a strengthening of Turkey's as concerns Iran and the entire region for that matter.

Hopefully this will calm down, but I wouldn't bet the farm on that yet.
This could become very, very, serious to our position in the Middle East.

Don't count on it, my automated friend.