The Telegraph:
Syria: 'I am the real dictator', declares Asma al-Assad
Asma al-Assad, the British-born wife of Syria’s president, told a friend that she was the “real dictator” in the family, according to leaked emails that suggest she holds a cherished place in the leader’s inner circle.

Despite the ambitions she expressed for liberalising Syria before the uprising, Mrs Assad, 36, displays no misgivings about the regime’s bloody crackdown, which has accounted for most of the estimated 8,000 lives lost.

Her correspondence with Bashar al-Assad, his aides, friends and family portray her as highly supportive of her husband.

In an email to a family friend on Jan 10, she praised a speech the president gave for conveying a sense of being “very strong, no more messing around”.

In another, she complains that ABC News unfavourably edited an interview with him.

On Jan 17, she circulated an email cracking a joke at the expense of the people of Homs, shortly before a regime onslaught that would claim hundreds of lives.

The people of the city have long been the target of derision for other Syrians. Mrs Assad received from her husband an email with the subject line “Student who obtained 0% on an exam”.

It contained one of those lists of jokes that circulate widely on the internet, in the form of questions with silly answers. The first was: “In which battle did Napoleon die? – His last battle”.

The next day she forwarded the email to her father and two other family members with the changed subject line: “A really bright Homsi student!”

Mrs Assad’s “dictator” comment was made partly in jest during an exchange with a friend about how much attention spouses typically pay to each other.

“As for listening – I am the REAL dictator, he has no choice ...” she wrote on Dec 14. Her use of the word in reference to her husband suggests she understands how others regard him.

It will not be helpful to Mr Assad, who has made a show of passing reforms since protests against his rule broke out.

Mrs Assad comes across as comfortable with the middle class English world in which she grew up as the daughter of a cardiologist in Acton.

The mother of three, who went to university in London, chats affectionately with her family, receives shopping offers from John Lewis, and speculates about potential overseas holidays with friends.

But international sanctions forced her to shop online with an alias and to to ask friends to collect jewellery from Paris. To receive a delivery of furniture she had to find a friendly shipping company in Dubai.

Only fleetingly does she let any strain show. On Feb 3, she wrote to a friend: “Also been meeting a lot of families of victims which is hard but also gives me strength (or makes me stronger).”

The accounts were stopped a few days later when the Assads realised they had been exposed.

An investment banker in the City before marrying and emigrating aged 25, Mrs Assad has worked to maintain the regime’s dwindling links with the outside world. She sought what she called a “strategic alliance” with MTN, the Pan-African telecoms giants and her Syrian Development Trust, which even before the crisis was seen by critics as a veneer of social reform for the regime.

The tranche of 3,000 emails came from the private accounts of Mr and Mrs Assad and were passed by opposition activists to The Daily Telegraph and other media outlets.

Although pseudonyms are used, the identities of the president and his wife are beyond any reasonable doubt given the recipients and subject matter.

The president is affectionate to his wife, although his inbox shows that two of his trusted aides were young Syrian women based in the United States. A woman who looked to be in her 20s sent him a photograph of herself standing provocatively against a wall in her underwear.

Mr Assad’s cynicism is sometimes striking: he disparages his reforms to appease protesters as “rubbish”.

His wife at least appears aware that four decades of Assad family rule could end soon. 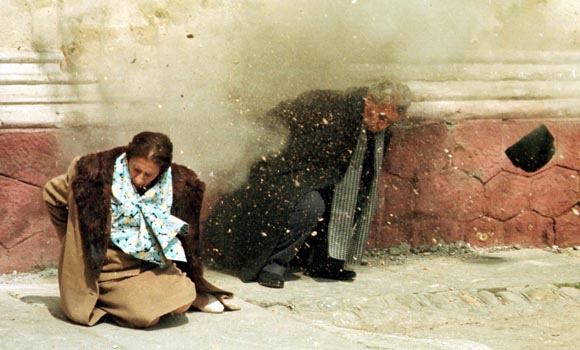 Do to both what the Italians did to Il Duce & his mistress. In public, of course.