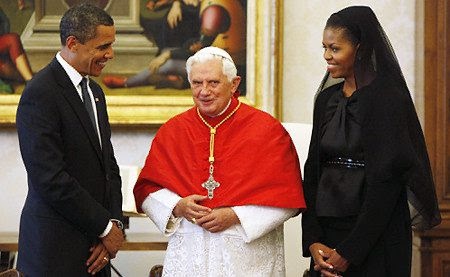 A core component of Marxism is to destroy organized religion.  So, Obama’s new attack on the Catholic Church should be no surprise.  First, it was the unprecedented effort to destroy the church’s rights of religious conscience through a contraception benefit mandate.  Now, Obama is abusing the power of the Executive Branch by using the banks to control the Catholic Church.  Following up on his directive to put the Vatican on the Money Laundering List, Obama is, now, meting out his punishment.
Via The Blaze,


JPMorgan Chase is shutting down the Vatican’s bank account with its Milan branch due to a “lack of transparency,” according to Reuters.
“The Vatican bank, also known as the Institute for Works of Religion (IOR), is having its account phased out and closed by March 30,” Business Insider’s Julia La Roche reports, “because it apparently ‘failed to provide sufficient information on money transfers.’”
…last year the Vatican formally adopted internal laws to comply with international standards on financial crime and they now comply with the rules of the Paris-based Financial Action Task Force (FATF), according to Reuters.
Moreover, the IOR has created an internal Financial Information Authority (FIA) and has “committed to comply with international anti-money laundering standards and liaise with the group and law enforcement agencies,” according to the report.
Which brings us back to the question: why did JPMorgan decide that now was the time to “phase out” the account? Investigations haven’t presented any new information, the Vatican has enacted major reforms, and talk of money-laundering and tax fraud are still just allegations.
Perhaps JPMorgan chose to close the account after the U.S. State Department decided to include the Vatican on its “financial crimes” list.
“For the first time, the Vatican has found itself on the U.S. State Department’s list of potential money-launderers,” The Blaze’s Billy Hallowell reported last week.
“According to the State Department, the Vatican made the list because it is considered vulnerable to laundering and because it had recently put a program into place to prevent financial abuses,” he added.
But much like JPMorgan’s decision to close the Milan account, some found the timing of the State Department’s inclusion of the Vatican on its “financial crimes” list a little odd: “Clearly, there are issues of concern, but the Catholic Church is taking measures to address these elements.”
Were either of these decisions aimed at the Holy See’s finances really necessary?
Considering the fact that the Catholic Church is currently engaged in a culture war with the Obama administration (and the world at large), a few critics believe we are witnessing much more than a mere pursuit of “financial transparency.”

Wake up, people!  Obama is no Democrat.  He’s just a conventional Marxist using executive powers to achieve Marxist goals on the way to his Marxist Utopia.

Hey Pastorius,
It's J from justifythis. Long time no speak. Hope you and everyone else is doing well.

Just an fyi, the killer in France has been caught and suprise suprise, he wasnt a right winger as the media tried to have us believe. The more things change....

Like I said, hope all is well, good to see you are still fighting for the truth. God bless to all of you,

Good to hear from you J. Hope things are going well.

For everyone else, J is the guy who actually started IBA.

Far as Bum-bum cares, whatever works. The officials of the Catholic Church, nevermind what followers do in their private lives re birth control, should fight him tooth & toenail. But just watch, they will cave, when they should be shouting from the rooftops. They have the collective backbones of squid.