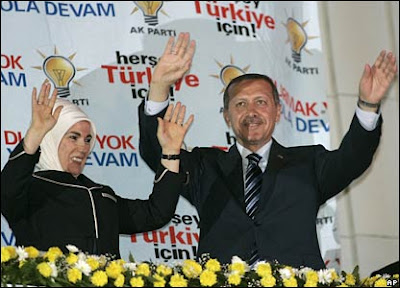 Erdogan and his skuzzy, disgusting skrank of a wife
Is Barack Obama an idiot,or a Muslim? It's really getting to the point where those are the only two choices you've got.

Fuck Barack Obama. Get him the fuck out of the White House.

Obama, who met with Erdogan March 25 at the nuclear summit in South Korea, has already met with Erdogan numerous times. He touted their relationship as a “friendship” in a January interview that was hyped by Erdogan’s press allies.

The two met in South Korea on Sunday, Eastern Time, to discuss Syria’s civil war and Iran’s nuclear weapons program, but they also talked about the president’s two daughters, Malia and Sasha, Obama said during a press conference, according to a White House statement.

“The bottom line is that we find ourselves in frequent agreement upon a wide range of issues… [and] because he has two daughters that are a little older than mine — they’ve turned out very well, so I’m always interested in his perspective on raising girls,” Obama said.

One of Erdogan’s two daughters, Sumeyye, is entering Turkish politics via her father’s Islamist party, according to the Turkish press.

She wears Islamist-style clothes that obscure her hair and shape.

In Sept. 2010, the then-29 year old met with her father and U2 singer Bono while wearing a scarf that covered her hair and throat, long-sleeves that covered her forearms and a baggy overcoat that hid her figure.

In Feb. 2011, Sumeyye attended a meeting at the United Nations headquarters in New York while wearing a tight head-scarf that hid her hair and throat. She was accompanied by Erdogan’s wife, Ermine, who wore a head-to-toe black cloak.

The first lady, Michelle Obama, is a feminist and does not wear head scarves or throat scarves and often leaves her arms bare.

Obama likely made the error, Rubin said, “because he is so unselfconscious and is not used to having to think through his remarks.”

Still, “it is shocking that [Obama suggests] he takes child-raising advice from a radical Islamist,” whose wife dresses in black cloaks or tight headscarves when traveling in the West, said Rubin.

Overall, the White House statement about the meeting “goes beyond polite praise and good manners and practically slobbers over a repressive, pro-Iran leader whose hatred for Israel is literally hysterical,” said Rubin.

I despise Obama, but never thought I would ever read anything as crazy as this statement from him!

Is he going to bout that Turk for advice about fgm too?

Alex.
If the President of the United states says that he's interested in Erdogan's perspective on raising girls, then i presume the American public has a right to meet these Girls, who might be an example to their leader how to raise girls.

I would agree with you if the "kids" themselves weren't public figures.

I don't agree with Alex. Obviously this photograph is not exploitative. So, it does not matter. Children are depicted in photographs all the time. The man allows his girls to be photographed in public, so we are free to reproduce those photographs. We are certainly not doing so with any ill intent. Only to show what his idea of a young woman is, ENSHROUDED!

Erdogan is primitive and anti-American, anti-Western Civilization. He is an Islamist. And, that is who our President goes to for advice on fathering girls.

Anyone who does not recognize how disgusting this is simply does not care much for women's rights.

By the way Pastorius,

Is Barack Obama an idiot,or a Muslim?

I didn't know there was much of a difference. :-P

I won't let you walk away just like that!

In my "JIZFI" religion it says:- 'The fathers have eaten sour grapes, and the children's teeth are set on edge?' (Question Mark!)

Or read the original here:- Deuteronomy 24:16

P.S.
And why did you mention the stinkin' rottin' maggot called - Erdogan?
Good for what? Huh?!

Gee, I didn't know that.

I think I am morally superior to you on this. I think I need to tell you.

Unless you have a rule against all depictions of minors (which is your own personal rule, not anything I agree with , nor am likely to agree with) then you are just wrong.

And, weighing everything out, apparently, you don't care much about women's rights to represent themselves as individuals.

I never said that and I did not intend to claim moral superiority above any of the writers on this post!

If so understood, it is likely that my lack of fluency in the English language is a factor in it, and for that I'm deeply sorry!

My response on the comments on your article was a spontaneous reaction, since in accordance with my principals (and yours too! I'm sure of that!), the usage of family members to bash a public figure, even a hated political rival, is a big No-No!

well well, upset of what Obama's did, you might be right, Obama should not ask such Muslim on how to raise his daughters, because the only question on how to raise Obama's daughters is "how to make my girls cover their heads", nothing about morals and good manners, and you call muslims radicals
At least ِِAs painter i can draw sasha's naked body depending to clothes and make Obama enjoying my art, but can you do the same with Erdogan's girls :) ?

Why are you here?