Freedom Does not Cringe 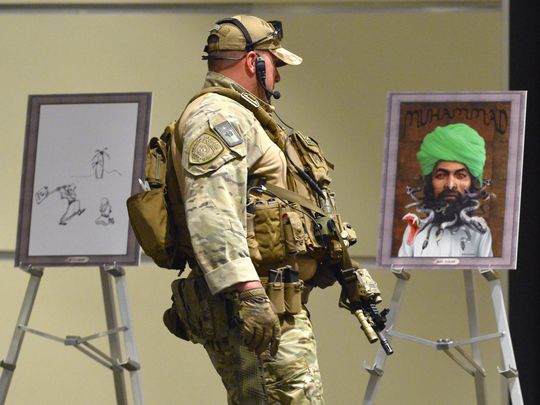 
“The future must not belong to those who slander the prophet of Islam.” President Barack Obama, 2012

The history is front seat, embedded in my psyche. The Federal Bureau of Investigation attacked a freedom of expression event using a proxy. For this, the agency must be brought to account.

Flashback to the Draw Muhammad Exhibition: Reaching into my closet for black slacks and a matching blouse my heart was calm. My husband had offered to take me to the event and wait in the parking lot until the exhibition was complete.

The deal we had struck was that I would only allow him to accompany me if he vacated the parking lot, camped out at a local restaurant, and awaited my phone call.

As a journalist engaged in on-the-ground interface with Muslims for a decade, my gut told me that at least one individual would not be able to resist the call to jihad. This would be Charlie Hebdo in Garland, Texas.

The attack came. The jihadists were drawn into a kill box and a security guard was shot – possibly by friendly fire. But I do not think of the security guard.

My mind is drawn to the matrix in which we were placed. There was no woman in the red dress. But there was a pre-teen red-headed girl. She was beautiful – her straight, long hair swaying across her back. There was no woman in a red dress but there was an elderly couple, the woman crowned with the white hair which she has earned, the wrinkles which are a private road map to her life, hopes, and dreams.

We did not ask for this. We were human guinea pigs in a laboratory ...

Been reading (Audio Book) about what the Mongols did to the Islamic Caliphate.

My man Hugalu in particular.

A couple thoughts trickle out.

1. Even if my wettest dreams about nuking every major Islamic city came true ..... that still wouldn't be enough to eternally solve our Muslim problem. The Mongols achieved the same total depopulation result I desire ..... but it sprang back up within a generation.

2. American GIs ..... have never, in any war in our relatively short history .... fought the kind of war it would take to effectively pacify the Islamic world. The Mongols chewed up Western Armies with ease as well.

Outside of perhaps the Roman's constructive Genocide of the Celts..... Our Firebombing of Dresden ..... and the inhumane acts the Nazis and Soviets reciprocated on the Eastern Front.... its just not in western military (and societal) DNA to prosecute a war of annihilation.

Not suggesting our guys as individuals are not the biggest badasses on the planet today ...... but our doctrine, and their consciences, wouldn't allow them to mow down the women and children that came crawling out from under our mushroom clouds. And those survivors would be the breeding stock for our next generation of Islamic enemies .... more committed to our destruction than ever.

Gentlemanly warfare has evolved to this point ...... but someday somebody (probably an Asian) without such moral qualms is going to expose this weakness again.