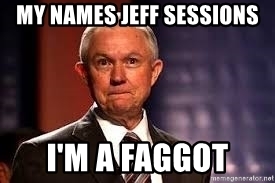 Two days after the briefing, Reid penned a letter to Comey requesting an investigation into potential collusion between the Trump campaign and Russia.

"The evidence of a direct connection between the Russian government and Donald Trump’s presidential campaign continues to mount and has led Michael Morrell, the former Acting Central Intelligence Director, to call Trump an 'unwitting agent' of Russia and the Kremlin," Reid, a Nevada Democrat, wrote.

"The prospect of a hostile government actively seeking to undermine our free and fair elections represents one of the gravest threats to our democracy since the Cold War and it is critical for the Federal Bureau of Investigation to use every resource available to investigate this matter thoroughly and in a timely fashion." ...


MEANWHILE LOOK WHAT THAT FAGGOT JEFF SESSIONS IS UP TO.