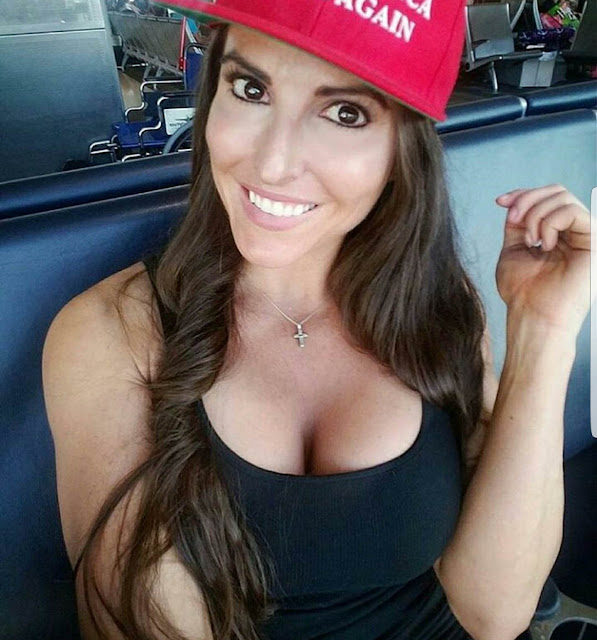 
Donald Trump goes to Europe, scandalizes the Euroweenies, libs, and cruise-shilling grifters of Never Trump, and comes back victorious. He’s about to get his second SCOTUS justice confirmed – all they have on Brett Kavanaugh is that he likes beer and is named “Brett.”

In Congress, the Democrats decided to go all in on abolishing ICE because Americans love open borders and welcome MS-13 or something. In the Mueller farce, the Dems decided that the smart play was to publicly run interference for creepy weirdo Peter Strzok when he went on national TV doing his impression of Lotion Boy from Silence of the Lambs. Hey Pete, what do those Trump voters smell like?

Smells like a red wave to me, you insipid weirdo.

How did Trump luck out by getting such hopeless geebos for opponents? It can’t just be chance. At every turn, these dummies choose to lock themselves into the most implausible and indefensible positions imaginable, then push all their chips into the center of the table.

It’s almost supernatural – maybe Trump won the intervention of some ancient demon by heading over to the offices of the Weekly Standard and snatching away one of its Never Trump scribblers to use as a virgin sacrifice.

Look, I was not a Trump fan at the beginning – I was anti-Trump but never Never Trump, both because I was Never Hillary and because I wasn’t a Beltway squishboy who would take his white paper and go home when my guy Ted Cruz lost. I just had no idea what to make of Trump at first because he didn’t look like any mainstream Republican I had seen in the last few decades.

But then, I soon realized that he didn’t look like any mainstream Republican I had seen in the last few decades because he wasn’t a hapless loser. He was the anti-Jeb!. I recount my conversion (hilariously, according to such blurb writers as Nick Searcy and David Limbaugh) from being anti-Trump to Trump-curious to pro-Trump in my upcoming book Militant Normals: How Regular Americans Are Rebelling Against the Elite to Reclaim Our Democracy, except I give a lot more detail and use a lot more swears in there.

Suffice it to say that my conversion (and that of many others) was based on the undeniable fact that Trump kept his promises and sided with America in a way we haven’t seen from a Republican since Reagan was owning the libs back in the eighties. How did this guy win, and in doing so crush the avatar of the establishment, the smartest woman in the world, Felonia Milhous von Pantsuit?

One of his secrets to success is really no secret at all. It is to embrace the obvious. Unlike our exhausted establishment, Trump rarely holds to bizarre, indefensible positions. You would think that would be an instinctive thing for politicians of both parties – “I know! I’ll adopt stands on issues that won’t make my constituents ask ‘What the hell is wrong with you?’” – but it isn’t.

Instead, the establishment has somehow talked itself into taking positions that are so clearly ridiculous that Normals scratch their heads, baffled at what they are being told by their betters via the lapdog liberal media.

Look at NATO. The entire foreign policy establishment is scandalized that Trump says he expects the Europeans to cover their fair share of the NATO nut. Now a normal American is going to think “Yeah, I think they ought to pay their share of their own defense. Sounds reasonable.” But the establishment collectively wets itself – “HE’S DESTROYING THIS ESSENTIAL ALLIANCE BY ASKING THE PEOPLE BENEFITING FROM IT MOST TO ACTUALLY PARTICIPATE IN IT!”

And the Normals (many of whom, like me, actually served in NATO) wonder, “Well, if it’s so essential, why aren’t the allies eager to pay for it?” And the establishment responds, “SHUT UP, RUSSIAN STOOGE! ASKING THE ALLIES TO MAKE NATO MORE EFFECTIVE BY PAYING WHAT THEY PROMISED, WHICH IS STILL A FRACTION OF WHAT THE U.S. PAYS, IS PLAYING RIGHT INTO PUTIN’S HANDS. ALSO, THE EMOLUMENTS CLAUSE SOMEHOW.”

Okay, as an expert on arguments, I must observe that this is a losing argument. Now, I’m not relying on my expertise gained from a quarter century of convincing juries to go my way to say that. I don’t need to. I’m relying on the fact I have actually met normal Americans. This is such a facially idiotic argument that only someone in the establishment could talk himself into believing it.

Here’s a test. Leave DC or New York, drive a few hours out to America, find a random guy on the street and ask, “Hey, don’t you think it’s awful that Trump wants our allies to increase their contributions to their own defense to just about half of what the U.S. pays?” You can safely assume he’ll respond, “Wait, why only half?”

A raspy voiced Larry Nichols explains the Strzok "insurance policy"
https://www.youtube.com/watch?v=PT-CFUJFJ60
Highlights:
*June 2018 Slate: FBI ignored Anthony Weiner’s laptop. That may have cost Hillary Clinton the election. ===>On Sept. 26, 2016, as part of a sex crimes investigation, an FBI agent in New York found hundreds of thousands of emails on a laptop belonging to former Rep. Anthony Weiner, who was married at the time to Huma Abedin, a top Clinton aide.
Two days later, the head of the New York FBI office told dozens of FBI executives, including Deputy Director Andrew McCabe, that the laptop had 140,000 emails possibly relevant to the Clinton investigation. The next day, on Sept. 29, the New York office told several members of the FBI’s Clinton investigation team that the emails included BlackBerry messages. That was a red flag, because although the FBI had closed the Clinton investigation in July 2016, it had never found old messages from her BlackBerry account, which theoretically, was the most likely place to contain evidence of criminal intent." <====

* Schumer: Intelligence Community My 'Get Back At' Trump for Tweets " video clip posted January 11, 2017 on the Rachel Maddow Show here

With Hodgman married to Strzok, she, like Hillary remains married so as to prevent testifying against spouse. Hodgman now in position to prevent/guide cases for enforcement - hence, the apparent lack of prosecutions.