BRING IT ON: World War 3: Iran threatens to send TERRORISTS to USA as it warns ALL OUT WAR is imminent 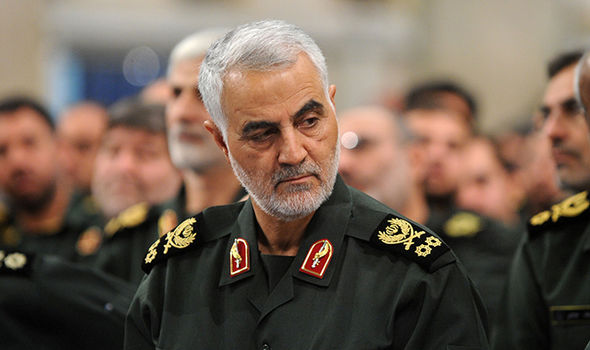 
And Major-General Qassem Soleimani has claimed that if the US starts a war, “Iran will finish it”. Mr Soleimani, who heads up the Quds Force of Iran's powerful Revolutionary Guards Corps, was reported by various Iranian news agencies as having made his comments during a speech in the city of Hamedan.

He said: "As a soldier, it is my duty to respond to Trump's threats. If he wants to use the language of threat, he should talk to me, not to president Hassan Rouhani.

"What could you have done against Iran in the past 20 years that you haven’t done already? At the end, the victory belonged to the Iranian nation.

"You know that this war will destroy all that you possess. You will start this war but we will be the ones to impose its end. Therefore you have to be careful about insulting the ian people and the president of our Republic."

And in an apparent reference to acts of terror, he added: "You know our power in the region and our capabilities in asymmetric war. We will act and we will work."

"You know that this war will destroy all that you possess. You will start this war but we will be the ones to impose its end.

"Therefore you have to be careful about insulting the Iran people and the president of our Republic.

Obama has been in Africa in recent days (mid-July '18) and may still be there. One wonders, given his generosity towards Iran, if he is not involved in the planning of any such attack as revenge against Trump's dismantling of his legacy.

Time to reauthorize targeted assassinations. We can play the asymmetric game as well.

One hopes that is already in motion behind the scenes. And since when has Iran NOT been sending terrorists to attack us? Any future such act directly linked to Iran should be responded to by turning swaths of Tehran into glass. (And someone please tell Tucker Carlson to put on his big boy pants about this!)

It is a pity that some decent Iranians and Persians will have to suffer too because the Muslim Marxist nuke deal's daddy-o threw them to the whores of Allah who run that hellhole.

This POTUS will wage wall balls to the wall. Iran had better consider that FACT.

I have a better quality image here: