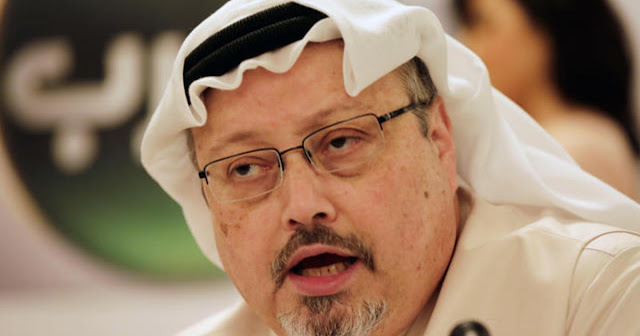 What extremist Muslim is NOT a Foreign Influence Agent?

Islam is invading force. All "devout" Muslims (those who believe in Sharia precepts such as putting gays and apostates to death, and Jihad against the Infidel) should be treated as such. They should be brought up on appropriate charges and imprisoned, or shipped out of the United States.

They should never be served a helping of the American Bill of Rights, because that is for actual citizens; people who are not fomenting a revolution against our government.


The Washington Post has caused itself a major scandal since it has come to light they and their martyred “reformer” Jamal Khashoggi were publishing anti-Saudi propaganda for Qatar. They tried to bury this in a pre-Christmas Saturday news dump, but that can’t stop the damage this will do to their reputation.

“Text messages between Khashoggi and an executive at Qatar Foundation International show that the executive, Maggie Mitchell Salem, at times shaped the columns he submitted to The Washington Post, proposing topics, drafting material and prodding him to take a harder line against the Saudi government,” the Post wrote December 21.

The Post says they were unaware of this, although Khashoggi’s Qatar connections were well known. They will have to answer for what is either incompetence in connecting these dots or simply not caring as Khashoggi’s attacks on President Trump and the Saudis fit right in with their narrative.


As founding Executive Director, Maggie has championed K-12 Arabic language and Arab culture education since 2009. She’s particularly focused on ensuring young people have access to cross cultural experiences in their community, through virtual educational exchanges, as well as physical exchanges with peers in other countries.

Does this sound like an agenda we want in the United States?

It sounds like an agenda that is already big in the U.S., but not one that is GOOD for the US.

In fact, it is how they plan to set us up to be killed.

I have to wonder about the motives of anyone who has advocated for Khashoggi.
Posted by Pastorius at 12:59:00 pm

Well, I have advocated. For reasons of Geneva Convention regarding Consular activities.

None of us should walk into a consulate which works on behalf of their own citizens with an ambush executed against us.

Kill on the streets. Not inside a consulate.

Sharks bite. Don't swim with sharks and then start crying when they bite your leg off.

VIDEO: Saudi Arabia's new foreign minister Ibrahim al-Assaf strikes a note of defiance in the face of international outrage over critic Jamal Khashoggi's murder, saying the kingdom is "not in crisis", in an exclusive interview with AFP
https://twitter.com/AFP/status/1078977739393286144