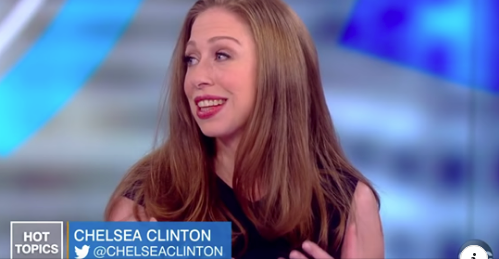 This family wants to lead our nation:


For Chelsea Clinton, America just isn't good enough. Here's her talking about her mom and the country whose voters rejected her, in an appearance on The View, finishing up with not wanting her kids to be exposed to such a place:

“I am so proud of my mom. I’m very biased toward her…love her very much and feel very protective of her, although I know she doesn’t need me to be. But, really my most important role now is as my kids mom. You know I have a daughter Charlotte who just turned five last week, a son Aiden, he is three and baby Jasper just two months old,” continued Chelsea Clinton.

“And I think about the country they’re living in right now it’s not the country I want them to grow up in. We learned last night that President Trump wanted to dig a ditch at the border and put alligators and snakes and shoot migrants in the leg…The depth of cruelty and inhumanity towards migrants, towards people of color, towards LGBTQ community…is not the America I want my kids to grow up in.”

Basically, because American voters rejected her mom and voted for her competition instead, the place now comes up short.

First, what is she doing making babies? Isn't her party's position that humans should get on with their extinction to save the planet?

Second, I agree with her. I do not want her children growing up here either. She and her children should leave immediately.