San Francisco: Heads Of Police Force Are a Lesbian, a Fake Woman, And a Fake Man 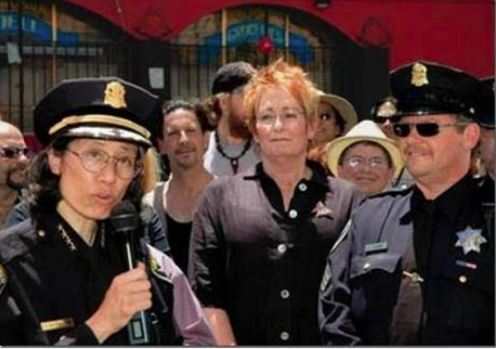 These are the heads of the San Francisco police force.

Theresa Sparks (center), a former male, is president of the San Francisco Police Commission, and CEO of a multi-million dollar sex toy retailer and a transgender woman.

Their Representative in Congress is Nancy Pelosi.

In San Francisco, the need for crime fighting, drugs, the homeless problem, law and order has been replaced by gender equality promotion.

This is like some kind of adults only comic book Sodom and Gomorrah.
I can only imagine evil spirits laughing their asses off trying to catch their breaths.

What about Danielle Outlaw, police commissioner of Philly, and a Soros plant? Somebody she looks like a composite of every Pixar character. She's a horror