The Other Day Trump Ordered California To Stop Draining Water Into the Sea, and Instead Give It To Farmers In Central Californis ... NOW THIS! 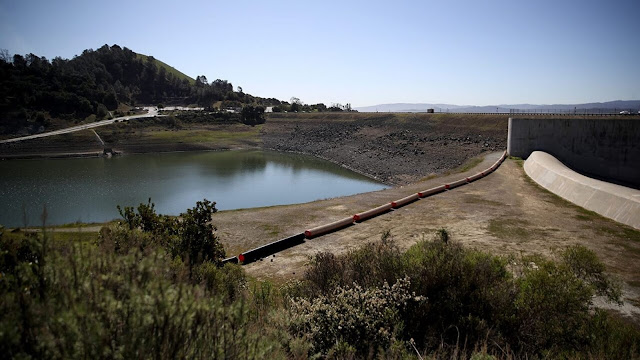 Trump told the farmers he was going to put a lot of pressure on California to make this happen:


One of the most significant agenda items for California Tea Party groups has always been getting the spigot turned on again to the state’s breadbasket, the Central Valley.

Authorities diverted massive amounts of water to protect the smelt and appease eco-activists.

Now, President Donald Trump has signed a memorandum directing more of the water to farmers and other agriculture interests in a prime agricultural area during a stop in the nation’s bluest state.

“For too long water authorities have flushed millions of gallons into the Pacific,” Trump said. “I ordered the administration to update outdated opinions which determined water allocation in this state.”

Trump added that he is going “to put a lot of pressure” on Newsom to enact the changes and if the California governor doesn’t follow through then “you’ll get a new governor.”

AND NOW, LOOK WHAT CALIFORNIA HAS DECIDED TO DO:

As California experiences a potentially record-breaking dry February, federal regulators have ordered that a large reservoir south of San Jose be drained due to fears a dam could collapse in an earthquake, sending a torrent of water into Silicon Valley.

The Federal Energy Regulatory Commission ordered last week that the Anderson Reservoir be completely drained by Oct. 1 due to fears the 240-foot high earthen Anderson Dam poses too great a risk of collapse if a large earthquake strikes.

“It is unacceptable to maintain the reservoir at an elevation higher than necessary when it can be reduced, thereby decreasing the risk to public safety and the large population downstream,” David Capka, director of FERC's Division of Dam Safety and Inspections, wrote in a letter Thursday to the Santa Clara Valley Water District, which owns the reservoir.


Is it possible that California would drain a reservoir in a drout year - under the false pretense that, suddenly, they are afraid of an Earthquake - just to spite Trump?
Posted by Pastorius at 1:31:00 pm