On Roger Stone and The Wages of The Deep State Coup 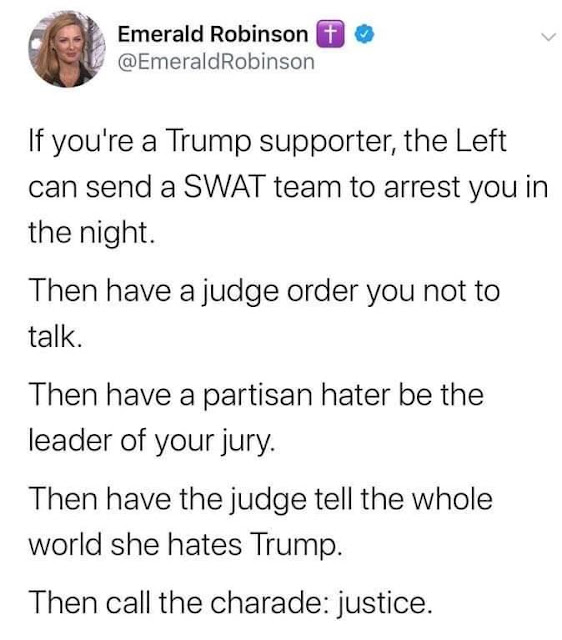 Analysis and reaction to the political persecution of Roger Stone:

The entire thing from beginning to end was a complete abnegation to the concept of justice, the rule of law - some of the bedrock principles of this nation. Unfortunately, we have a political party and movement that have so infected our governmental and societal institutions that we are on the brink of losing those principles and the nation with it.

Stone was railroaded with a process crime by a corrupt, weaponized law enforcement apparatus and then tried by an abject political hack who, like her fellow travelers infecting the judiciary, are there to preserve, protect and defend the Globalist counter-American revolution, with the coup de grace administered not by a jury of his peers but by a completely biased jury forewoman, no doubt presiding over 11 other equally tainted jurors.

When you look at the way Stone, along with Paul Manafort, General Michael Flynn, George Papadopoulos and others have been abused, squint your eye and you could be in Moscow circa 1938 or Berlin circa 1944.

That said, it's kind of a glass-half-full/glass-half-empty situation, all because we dared defy those who put Amy Berman Jackson on the bench by voting to put Donald Trump in office. They were never going to go quietly into that good night, as we have seen lo these past nearly five years. But in the long run, and it's easy for me to say this because I'm not rotting in jail like Manafort nor been drained of my finances like Flynn, it's far better that we have to see these injustices out in the open and be confronted by the cold hard truths about just how far the institutions that we grew up trusting and continued to trust have sunk than to have another Clinton, Bush, Obama or Romney keep us deluded right up until the moment we go over the cliff.

J.B. Shurk over at American Thinker believes that, per the title of his piece, Trump just made the judiciary blink. .


..Like most things the president says that cause alarm for the D.C. establishment, it is not the recklessness of his words, but their truthfulness that rattles them, and the more truth he slings their way, the more rattled they become. The judges realized they were about to make a consequential mistake by taking on directly the one person in the country not afraid to put the Judicial Branch in its place...

The FBI and Justice Department have done everything in their power to torment President Trump by pursuing process crimes against his associates, while allowing members of Hillary Clinton's campaign and President Obama's government not only to escape charges for creating an international spy ring to take down President Trump, but to do so while laughing about it on television.

While we wait to see whether U.S. attorney John Durham and Attorney General Barr actually have the intestinal fortitude to help right the ship of justice, most of us have given up holding our breath. Patience may well move mountains, but abused patience turns to fury.

And while the federal courts go out of their way to push back against President Trump by issuing nationwide injunctions against his legal orders and permitting malicious prosecutions against his allies in their courtrooms, they are also quickening the day of their own long delayed judgment...

When the federal courts chose to become kings, they daringly did so without a navy. Hiding behind the sanctity of priestly robes was going to protect them for only so long; eventually, Americans would realize that tyranny with a gavel is not at all different from tyranny with a crown.

With President Trump unafraid of standing up to a coequal branch of the federal government, the Judiciary may finally receive the comeuppance it deserves. One thing is certain: if he is ever to receive justice of any kind, President Trump must first take on the justice system.

And that is precisely what the President is doing. It also underscores the no less crucial and so far wildly successful project of confirming well over 100 judges to courts all over the country, including the national joke/nightmare that is the Ninth Circuit.

I am gratified to see that Trump has ignored Barr's irritating admonishment and continued to trumpet the injustice meted out to his friend and supporter Roger Stone.

When Barr petulantly complained that Trump's tweets were making it "impossible to do my job" I have to ask: Exactly what do you believe your "job" to be? It is serving justice and the American people, or protecting the reputation of the institutions under your temporary control?

I'm beginning to suspect the latter. I simply can not trust that reputations for integrity mean anything more in DC than they would in Alice's Wonderland.