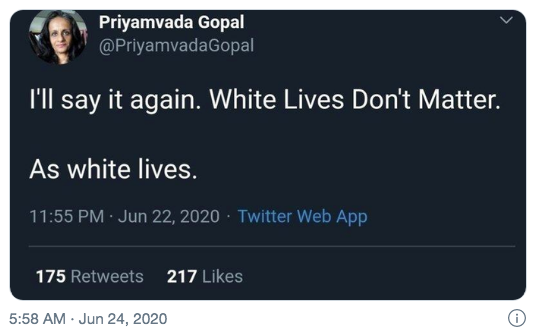 Cambridge University has defended one its academics after she tweeted “white lives don’t matter,” despite the institution previously dismissing another academic who made far less controversial statements.

“The University defends the right of its academics to express their own lawful opinions which others might find controversial and deplores in the strongest terms abuse and personal attacks. These attacks are totally unacceptable and must cease,” said the statement.

Media reporting on the incident has centered around alleged “abuse” Gopal has received off the back of a petition being launched to get her fired. Apparently, the backlash to Gopal’s remark is more contentious than the racist nature of the remark itself.

By the way, here is her explanation for her incendiary statement:


Speaking to CambridgeshireLive, the professor from India explained her tweets: "I was saying whiteness isn't the reason lives should matter. Lives do matter, but not because they are white. I say the same thing about my own community."

Ok, then my challenge to you, Priyamvada, is, go ahead, write a post that says, "Brown Lives Don't Matter."