How Does Islam Differ From Christianity? 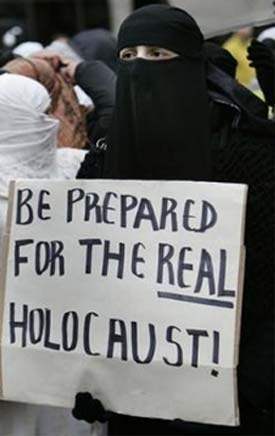 Since Christianity and Islam are the two largest (comprising about 55% of the world’s population2) religions in the world people often wonder where they disagree and how significant the differences are. A brief look at six doctrinal contrasts will help address this question.
First, it is important to note that Islam shares common ground with historic Christianity. For example, both religions are:
However, the differences between the two religions are profound. Since Islam emerged about six centuries after Christianity, we’ll outline how Islam reacts to essential Christian truth claims. As you’ll see, traditional Islam denies the essence of historic Christianity.
Six Systematic Doctrinal Denials
Both Can’t Be True
RTWT.
Posted by Pastorius at 1:44:00 pm

Just analyze their character differences. How does the G-d of the Bible describe himself to Moses to whom he directly spoke?

Versus: How does Allah allow the angel who spoke to Muhammad on behalf of Allah to describe the character of Allah through the Koran?

A man cannot have a more exemplary character than his g-d. If a man's moral character excels that of his deity, then the man's deity is beneath the man and is no deity at all. And from that idea follows the question asked by Jesus, "Why do you call me good (morally perfect)? There is only one who is good, that is G-d." In other words, if you recognize Christ as morally excellent/perfect, then why are not acknowledging him as God?

Well then, you're unBiblical.

Actually #5 and #6 are most definitely unbiblical