COVID Laid The Groundwork for Revolution 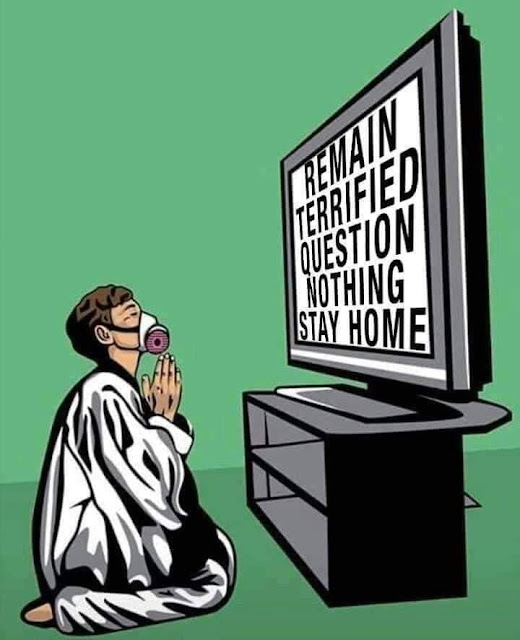 COVID is not and never was a health crisis remotely justifying the destructive magnitude of the measures imposed — allegedly against it. It is and always was a seized-upon, contrived, promoted, exaggerated, and prolonged wedge, utilized from the beginning by the political left for its ends and abetted by an establishment already dominated by those who hate our society and its history or are too badly educated to love and defend either.

All of America's institutions having capitulated with barely a murmur to the lockdown and mandatory masks, with all the weakness and passivity they collectively symbolize.

The left saw that the moment was ripe for a real revolutionary blow. It bet that blow would conclusively expose the helplessness to which decades of inculcated cultural self-loathing and abasement had reduced those whose duty is to defend America's civilized order — a civil order the moral goodness of which has never been surpassed in human history.

And the Floyd riots came.

And the left was correct. The same institutions — that had not the intelligence, courage, or faith in their own society to criticize or question the ongoing ruinous and ludicrously indefensible COVID tyranny — quite predictably refused to lift a finger against the Floyd mobs that rampaged, and still now threaten to continue rampaging, across the country.

The COVID tyranny and the Floyd riots are not irritants that will pass when the Wuhan flu disappears and America's elites have humiliated themselves and baselessly defamed their less protected fellow countrymen as racists sufficient to sate the mob.

This time, COVID has taught our would-be masters that the generations of Americans now living are easily ordered about and stripped of their ancient rights, and authority's meek and feeble acquiescence in the face of utterly unjustified destruction — of our cities and the monuments to our history — has taught the mob that society has lost faith in itself and accordingly that plunder and widely inflicted violent chaos carry no risk.

Government will be back again and soon, with another crisis, justifying new measures of control over the most minute and intimate details of our lives. The mob will be back, on pain of more plunder, with new lists of non-negotiable demands for apology, abasement, and compensation of injustices that exist only in its fevered and uninformed imagination.

When a society loses the will to resist the mob, up to and including force, it opens the door to revolution. France learned that in 1789, Russia in 1917. In both societies, chaos and mass murder followed. Neither society ever fully recovered, and it is unlikely either ever will.

Preview of what may be a remarkably honest & timely movie about the Soviet Communist Ukrainian terror famine, & the honesty of Gareth Jones vs. the dishonest moral cretinism of the NYT's Walter Duranty, Stalin/Soviet apologist & "Pulitzer Prize winner"


https://twitter.com/andrewbostom/status/1274431807946096642
Agnieszka Holland’s thriller, set on the eve of world WWII, sees
Hitler’s rise to power and Stalin’s Soviet propaganda machine pushing
their “utopia” to the Western world. Meanwhile an ambitious young
journalist, Gareth Jones (Norton) travels to Moscow to uncover the truth
behind the propaganda, but then gets a tip that could expose an
international conspiracy, one that could cost him and his informant
their lives. Jones goes on a life-or-death journey to uncover the truth
behind the façade that would later inspire George Orwell’s seminal book
Animal Farm.

Well they won't let up will they, any of them? Even Bret Weinstein, posted here the other day, wants another 6 week lockdown of EVERYTHING -- "unbearably painful" and including "intense contact tracing" -- so his theories about lab escape, enhancements, transmissibility, vitamin D, why it's hard to catch in sunlight but we should all wear masks and distance because it's easy to catch outdoors in daylight even though it's transient but maybe less/more so at night because of UV blah blah blah. You all won't mind your lives put on hold and your businesses shuttered all over again so we can try out those theories, will you...? But whatever you do, don't stop wearing that big bank-robber mask over your face.

I'm old enough to remember a corny joke about a kid whose mother is trying to get him to eat spinach so she tells him it's actually something else, something good for him but he'll like.


We're not "all in this together" and I say to hell with it.

Do Jewish Democrats realize that Black Lives Matter has aligned itself with Hamas against Israel?

Anonymous, far as I can figure out, Jewish Democrats don't realize much of anything. Up here in Marxachusetts for years there was a Republican rabbi who ran a superb series of lectures in his synagogue featuring speakers such as Geert Wilders and Stephen Coughlin and other top-level experts on the threat from resurgent supremacist Islam. The leftard rabbis in the greater Boston area finally pressured him to cancel the series. Those people would be asking the SS officers "Can't we talk about this?" on the way into the gas chambers. They all but crawl in and kiss raised arses at the Islamic Society of Boston. BLM comes with that package. I don't know why they don't all relocate to Florida so they can wade into the ponds and feed the alligators.

It is incomprehensible, but then so much is these days.