AP Declares It Will Uppercase "Black", Indigenous, Asian, Latino, But Will Lowercase "white", Because "White People Do Not Share the Same History of Culture 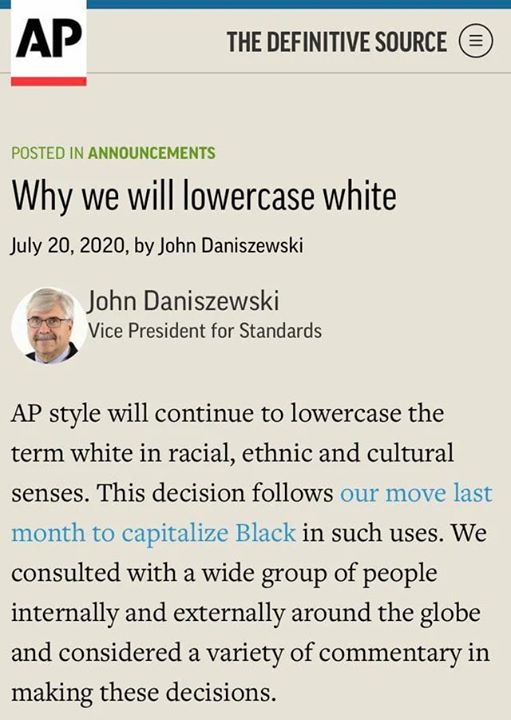 AP’s style is now to capitalize Black in a racial, ethnic or cultural sense, conveying an essential and shared sense of history, identity and community among people who identify as Black, including those in the African diaspora and within Africa. The lowercase black is a color, not a person.

AP style will continue to lowercase the term white in racial, ethnic and cultural senses.

We also now capitalize Indigenous in reference to original inhabitants of a place.

These decisions align with long-standing capitalization of distinct racial and ethnic identifiers such as Latino, Asian American and Native American.

Our discussions on style and language consider many points, including the need to be inclusive and respectful in our storytelling and the evolution of language.

After a review and period of consultation, we found, at this time, less support for capitalizing white.

White people generally do not share the same history and culture, or the experience of being discriminated against because of skin color.

There is so much wrong and racist with this.
First the idea that White People do not share a history or culture is both a slander, and an Ideological Genocide against a distinct people.
The second thing that is wrong and disgustingly racist about this is the idea that Latinos, Asians, and Black People are some sort of Monolithic culture, as if there is no variance between Sudanese, Nigerians, Jamaicans, Dominicans, Camaroonians,  etc.
THAT'S fucking racist, to say that ALL BLACK PEOPLE ARE THE SAME.
Leftists are the most retarded racists on the planet. Next thing you know they going to be measuring skulls, and talking about sloped foreheads and shit.
I'm not big on race, until I am told my race is different from every other race.
And being that my family is multiracial, I'm pissed for them too.
Fuck you, AP.
Fucking scum.
Posted by Pastorius at 4:50:00 am

Coming from a family with a background in the grandparents' generation of Irish domestic servants and Newfoundland outporters, anyone who tries to tell me I'm their "oppressor" because of my skin color or ethnic background is going to wish they had not raised the subject.

So are they Black Chads, Black Iritreans, Black Libyans, or Black Sudanese? Hmmm

Or are they the Arabic root for black which also denotes the color green because of Africans who had a coppery colour to their skin?

So the only yardstick of "culture" is oppression-mongering? Creation, invention, advancement of rights, discovery, arts, industrialization, building, exploration, scientific advancement, medicine, agriculture, all count for nothing unless one can play the "victim" card even when it does not apply to oneself or to those of other colors with whom one interacts?

That's called tribalism. Its hallmarks are backwardness, poverty, starvation, disease, primitivism, ignorance, superstition, petty tyrany, suppression of women, resentment and envy. All of which should now be capitalized?