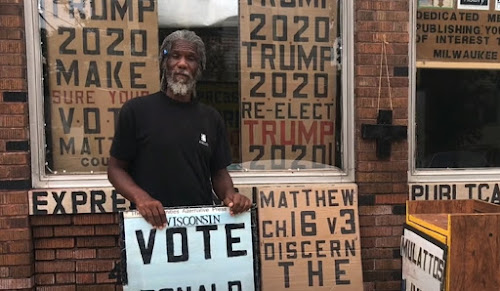 When they say “Black Lives Matter,” it is clear the left does not mean black lives like the one of Bernell Tremmell.

Tremmell was well-known in his Milwaukee community for being an outspoken advocate for President Donald Trump. He would spend his days out in the heat at City Hall or in his neighborhood with his homemade signs urging people to reelect the president in November.

On Thursday afternoon, the 60-year-old activist was fatally shot in broad daylight outside his business, Expression Publications. The storefront was covered in signs with bible versus, along with “Vote Donald Trump 2020,” and “Re-Elect Trump 2020.” The suspect reportedly drove up, shot him, and drove away.

Law enforcement sources told “The Dan O’Donnell Show” that they do not yet know the motive for the murder, since they have not yet made any arrests, but “detectives are investigating the possibility that Tremmell was killed over his political beliefs.”

I have personally HEARD a white Demarxocrat Karen loudly wish she had a gun so she could shoot the elderly veteran holding a Trump sign in front of the CVS in our tony little harbor town. I'm supposed to believe its some kind of coincidence that this poor, brave man was shot dead for doing the same thing?

BLM doesn't mean Black Lives Matter. It's "Black" is code for Marxist, and any black lives which oppose it do not matter one bit.