"The Constitution Guarantees Each State A Republican Form of Government, And Shall Protect Each One of Them Against Invasion and Violence" 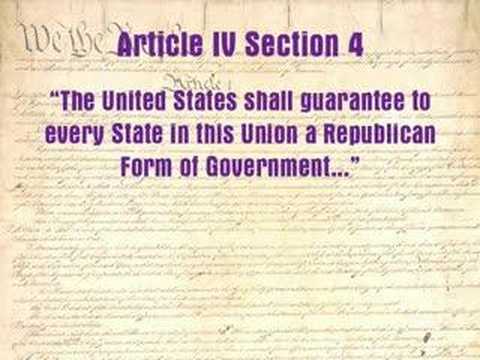 Police won't protect us. It's time to admit our only defense is self-defense, and the only help we can expect is self-help. And to mutually vow to each other that we will never, ever convict someone for resorting to self-help, if we're on someone's jury.

Either the state will enforce the law and protect us, or we'll protect ourselves, and protect those who protect themselves. Period.

The officials sworn to protect the civil peace have instead decided to protect the bandits and looters and arsonists. Instead of prosecuting them for their crimes, they nullify the law and let them out the next morning.

We can nullify the law too, guys. You're not the only ones who can set aside the law and free people for what might, in other times, be considered crimes of violence.

The state has decided we will be ruled by the mob.

But we never agreed to that.

The Constitution says that we will rule ourselves, through our elected officials. Not to the violent insurrectionists and anarchists the police and government have turned the streets over to.

The Constitution guarantees its citizens a "republican form of government."

The United States shall guarantee to every State in this Union a Republican Form of Government, and shall protect each of them against Invasion; and on Application of the Legislature, or of the Executive (when the Legislature cannot be convened) against domestic Violence.

And, crucially: The Constitution guarantees that the government will protect us from Invasion as well as from Domestic Violence.

Are state and local governments protecting citizens from Domestic Violence, or actively supporting the terroristic gangs inflicting that violence?

Obviously, giving over the streets to Private Vigilante Law Enforcement and Traffic Diversion Squads of antifa and BLM -- none of whom are elected and many of whom are straight-up criminal anarchists and mentally-ill ones at that -- is not a "republican form of government."

They are in violation of the Constitution, and we are under no obligation to follow the law in a lawless, unconstitutional state.