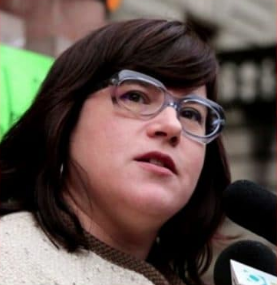 
Recently, the government sent Portland assistance in the form of federal officers. It was their job to protect the federal courthouse, which has faced damage from hundreds of protesters.

Reports claim that the courthouse has been under attack almost nightly, and vandalism remains a very serious threat.

Since that time, federal officials have attempted to form a protective ring around the courthouse, in the form of both manpower and fencing. But Portland isn’t exactly grateful for that help.

According to Fox News:

The city of Portland, Ore. is fining the federal government $500 for every 15 minutes it maintains unpermitted fencing outside of the federal courthouse that has faced nightly attacks amid ongoing protests and rioting.

City Commissioner Chloe Eudaly said that so far, the government has racked up a total fine of $192,000. And this isn’t merely a political statement, either.

She claims that she’s “afraid to direct workers to do their job,” and further adds that they fully intend to pursue collection of the fine. As Eudaly said in a tweet:

They cannot fine the feds. Lol.