Are COVID gene injections causing the excess mortality we are seeing? 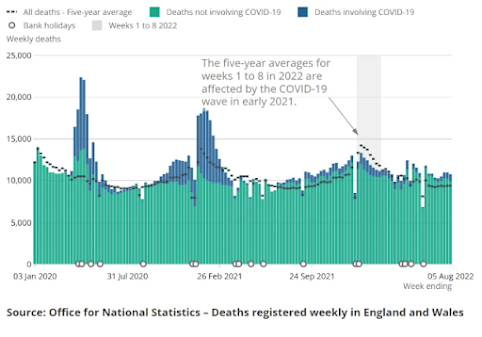 This remains the key question now for we are seeing excess deaths across the world and while some say it can be linked to the lockdowns and loss of treatment, some (we and I) argue that a large portion can be explained by the COVID injection directly. The Daily Sceptic’s Will Jones makes the case too.

SOURCE ‘The high number of U.K. excess deaths since April has finally made it into the mainstream media, courtesy of the Telegraph and Professor Carl Heneghan. According to the ONS, as of August 5th 2022 there have been 13,398 excess non-Covid deaths registered in England and Wales since April 23rd. The Telegraph reports that the Government is now looking into what is behind this alarming wave of unexplained deaths, which is about time, having previously said it would not. Does it only matter when the Telegraph says it?

However, nowhere are the vaccines mentioned by mainstream outlets as a possible factor. Instead, the impact of lockdowns (especially denial of healthcare access) and the lingering effects of Covid are put forward as likely causes.

I don’t doubt that these will be contributing. But with the main causes of the excess deaths being related to the heart and circulatory system, and the Covid vaccines being known to injure the heart and cause clotting, it is frankly bizarre and irresponsible not to include the vaccines in a list of possible causes of a rise in heart deaths and strokes.

A plausible scenario, for instance, would see vaccines and Covid combining to injure the heart and circulatory system. A signal for this would be a higher rate of cardiovascular deaths in the vaccinated compared to the unvaccinated. Data on deaths by vaccination status are hard to come by (and the ONS data on this are missing thousands of deaths and apparently misclassifying them, according to Professor Norman Fenton). But data on hospitalisations by vaccination status for non-Covid reasons appear to show that the vaccinated are being hospitalised at a much higher rate than the unvaccinated.