The Long March: The Communist Attack on Western Civilization, One Step at a Time 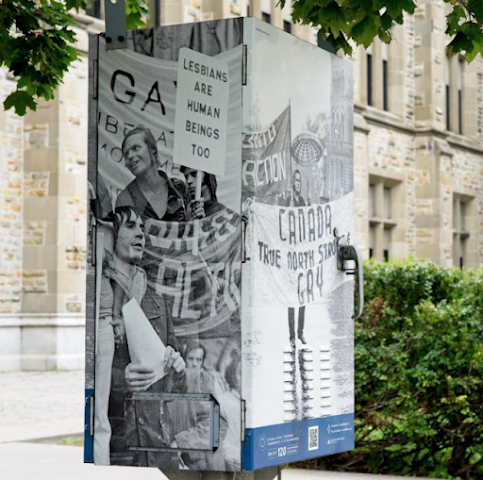 Subsequent to writing this article, we stopped to take the picture of the embassy flag below, and happened to find this poster beside us
From Vlad Tepes Blog:

Think of a value or a compartment or a taboo that is part of the Western culture and thought process and it is under attack. From national feelings to sexual habits to your traditional form of diet in the West.

A lot of people get it at one level, but at the meta, its quite a well constructed ceaseless attack, created and launched via communist and postmodern think tanks, some of which date back over a hundred years.

The evidence is overflowing. So permeated is our culture now that you can basically play a version of dialectic Pin the Tail on the Donkey and win every time. You could blindfold yourself and spin around and walk forward with your arm out and whatever you stop against is probably an example.

Each day that goes by, my list of examples grows, and of course, the project becomes more intimidating. So I have decided to do a kind of proto-post on the subject. Perhaps each time I add a data point, I’ll do it in a separate post and link back to this one. It may be messy, but at least the ideas will be out there.

Let’s begin with this video on Diversity training:

What the makers of this otherwise excellent video fail to understand, can be seen in the last couple of sentences

“Whatever the explanation, it is bad business in the long run”.

See, it’s meant to be. That is what many who are proper critics of the revolution that is now taking place, do not recognize or express. It is meant to ruin not just business, but all aspects of cooperation in our culture between all people by grouping them in various ways and setting them at each other.

Because after the National flag and the crest of the school, the most important thing about educating children from grade 5 to 12, is celebrating sexual identity and practice of anyone engaging in non-conventional sex acts and identifying as being part of groups with similar preferences at the expence, it would seem, of more meaningful identities.

This is so important, they actually have to flag the school with it. 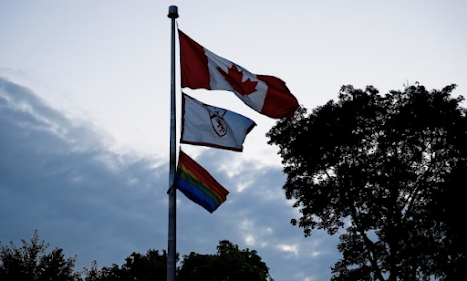 How long till that flag finds its way to the top? And then what is known as dialectic negation could occur. The replacement of the National flag, which is anathema to communism, with group identities which maintain acrimony and division. Until of course its all the party flag which by then will be a hammer and sickle. Perhaps Trudeau’s first minister of health could design it. After all, her training was entirely in graphic arts.

Her replacement is a graduate of the communist think tank university, The London School of Economics. Neither of them have any medical training.

Then we have the Rogers Communications building on Richmond Rd. in Ottawa. One of the HQ buildings for Canada’s main cable TV, internet, and cell phone providers. 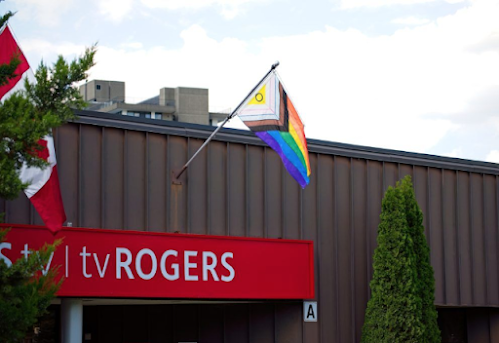 Rogers is more prepared than the private school. They understand that the dialectic attack is part of a never ending revolution, which is what communism is.

Their flag is the most up-to-date one with the bits added for Trans and whatever else has been added in the last year or so. At this point the Rainbow flag is at risk of being called racist since it is insufficiently inclusive of whatever new ‘groups’ or ‘communities’ have been created as part of the ongoing dialectic.

These photos are all from this August, 2022. “Pride Month”, which itself is revealing since it’s not “Gay Pride” anymore as, like the flag, its not inclusive enough, was all of June.

Also noteworthy is that the literally millions upon millions of young, healthy, productive and nearly entirely men, who sacrificed themselves for our freedom and culture and rule of law, get half a day a year to be celebrated and remembered, while people who like to have sex in unusual ways get a whole month.

Two months later, and the flags are hanging off buildings which are highly symbolic of important aspects of our culture.

To be clear about the highly annoying and too-often repeated word, “Dialectic”, I mean one thing. Operationally defined for the purpose of this post: dialectics is the weaponization and re-tasking of language in order to be used against classical thought and non-communist, or counter-revolutionary people.

We are being played:

A paragraph from Alexander's book - written years ago, is the playbook against the United States. You will find it in the link.

The cloth of our nation is frayed by all of the dissident groups who operate under Constitutional guarantee for freedom of expression. But they have weaponized the Constitution for a never-intended use - actions to destroy the Republic. We have freedom to speak and freedom of thought. But when it is controlled and manipulated by foreign interests, it becomes threat.