Geert Wilders: Loved by the People, Hated by the Parliamentarians 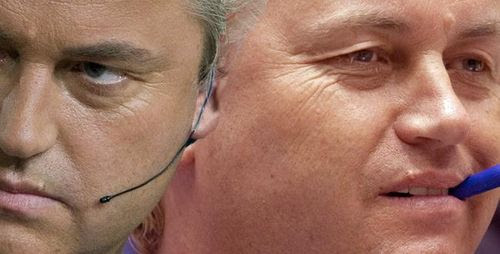 This is so gorgeous you can't help but smile, like the Mona Lisa. It says it all. It also points to a collision course for the moochers, looters and destroyers, aka the 'political elite' and the enslavers. It won't be pretty.

Loved by the individual, hated by the statists. He must be doing something right.

Dutch anti-Islam politician Geert Wilders has come in second in two polls for politician of the year. A panel of Dutch television viewers said he is the second best politician this year, while Mr Wilders' colleagues in parliament named him the second worst.

Quite a discrepancy. But, actually, not so surprising. It is yet more evidence of the gap between the public and the elite.

Next prime minister
Geert Wilders has made the disillusionment of many Dutch voters his reason for being. He is always ready to fight the establishment in the name of the little guy.

Part of the success of his Freedom Party movement comes from his style of speaking directly to the public. The simple, sometimes crude, language he uses on the floor of parliament has brought reprimands from his colleagues, and praise from his followers.

And it's his followers that have put Mr Wilders and his Freedom Party in a very strong position: second in European elections last spring, the largest party in the country for the last six months, according to one national opinion pollster. Mr Wilders himself openly speculates about becoming the next prime minister.

They write that as if the public does not openly WANT Wilders to be the next Prime Minister.

The people "get it" about Eurabia, the Parliamentarians either don't or don't care.

I guess there's no money in alienating a huge portion of one's population/tax base/voting constituency.

This just goes to show that sometimes the masses are smarting than arrogant political elite.