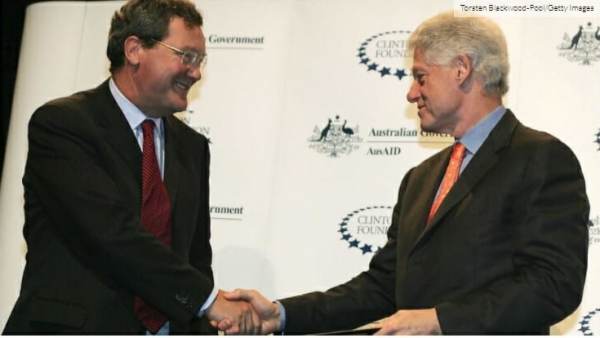 From the Gateway Pundit:


Deep State FBI did not tell Congress that the Australian who initiated the Russia probe was connected to the Clintons.

In fact we now know that all of the Trump-Russian collusion propaganda was tied to the Deep State and Clinton Crime Family:

1. The anti-Trump dossier was bought and paid for by Hillary Clinton and the DNC

3. Bill’s crooked friend Alexander Downer was source for the bar room discussions with George Papadopoulos that was fed to the Deep State FBI.

4. We now know ALL FOUR initiators of the Trump-Russia Collusion investigation were paid by Hillary Clinton or were donors to the Clinton Foundation.

Here is a transcript of their interview from ABC.net:


ELLEN FANNING: I want to start by asking you: did you meet with George Papadopoulos in the Kensington Wine Bar in May of 2016? And if so, what did he say to you?

ALEXANDER DOWNER: Well, let me be blunt about this. Of course, it has been widely reported that I did. But I don’t think talking about it is going to help our relationship with the United States or make any contribution that will advance Australia’s interests. After all, this whole question of Russia and any relationship that Russians may have had at any stage with the Trump campaign team is a toxic issue in American politics. And I don’t think any of us really want to be dragged into that any more than we can help.

ELLEN FANNING: You say you don’t want to talk about it, so it sounds like it did occur. And, as you say, it has been widely reported. Here is what we think we know about it. It’s information independently verified by the New York Times and by the Sydney Morning Herald: and that is that Mr Papadopoulos told you that he had become aware that Russia had a dirt file on Hillary Clinton, based on hacked Democratic Party emails. Is that what he told you, very simply?

ALEXANDER DOWNER: I mean, it’s exactly the sort of question that I definitely wouldn’t answer.