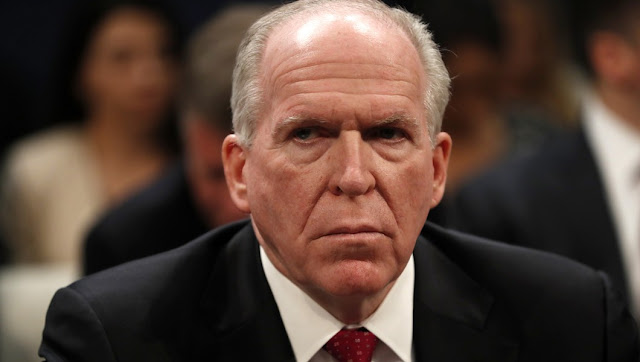 From The Moscow Times:


John Brennan, the director of the Central Intelligence Agency (CIA), made a secret visit to Moscow in March, according to Russian Deputy Foreign Minister Oleg Syromolotov. The visit, he said, had nothing to do with Russia’s decision two weeks ago to begin withdrawing from Syria.

“It’s no secret that Brennan was here,” Syromolotov was quoted by the Interfax news agency as saying Monday. “But he didn’t visit the Foreign Ministry. I know for sure that he met with the Federal Security Service (the successor agency to the Soviet KGB), and someone else.”

It wasn’t clear why Brennan visited Moscow, but the trip appears to have coincided with President Vladimir Putin’s surprise March 14 announcement that Russia’s combat operation in Syria was ending, and Moscow would soon withdraw a portion of its forces from the country after conducting 167 air strikes.

As Gateway Pundit puts it, it seems that Brennan may have gone to Moscow to pick up the dossier from the FSB, and then taken it directly to Fusion GPS.

ON THE OTHER HAND:


President Trump's decision to postpone new economic sanctions against Russia on Monday brought some clarity to the foreign policy fight in Washington. The issue isn't whether UN Ambassador Nikki Haley gets confused, as she waspishly denied, but the fact that the president is fighting the swamp single-handed. Here's the Financial Times' snarky Edward Luce in a blast email this morning:

The explanation is simple. Everyone in the Trump administration is really hawkish on Russia. Except the president. On most days the train simply keeps running without him. People such as Haley talk to Jim Mattis, the defence secretary, John Bolton, the national security advisor, Steven Mnuchin, the Treasury secretary, and so on, and agree on what ought to be done.

Under the headline "Trump, a reluctant hawk, has battled his top aides on Russia and lost," The Washington Post reported April 15 that the White House national security bamboozled the president about last month's expulsion of Russian diplomats. Trump was told that he had to expel 60 Russians to match what the Europeans were doing.

The next day, when the expulsions were announced publicly, Trump erupted, officials said. To his shock and dismay, France and Germany were each expelling only four Russian officials — far fewer than the 60 his administration had decided on...Trump insisted that his aides had misled him about the magnitude of the expulsions. “There were curse words,” the official said, “a lot of curse words.”

The incident reflects a tension at the core of the Trump administration’s increasingly hard-nosed stance on Russia: The president instinctually opposes many of the punitive measures pushed by his Cabinet that have crippled his ability to forge a close relationship with Russian President Vladimir Putin.

When the dust settles, I believe, the president will conclude that he was duped into launching last Friday's missile strike on Syria. As Angelo Codevilla, the dean of conservative foreign policy analysts, wrote yesterday at American Greatness, we do not know whether poison gas was used at the Syrian village of Douma or who used it. "The U.S. government’s claim that the Assad regime used chlorine gas and sarin together (that would be a first) against civilians separately from movement of ground troops (military nonsense) may or may not be correct. The government presented no evidence except videos. When it does have evidence, it usually crows."

The whole preposterous allegation that Trump somehow colluded with Russia is designed to sabotage diplomacy between Washington and Moscow. To reiterate my own longstanding view: Russia is a nasty place and Vladimir Putin is a nasty man, of the ilk that always has ruled Russia, a country where nobody talks about Ivan the Reasonable.

On my Ogre-ometer, Putin barely registers a 1.9 against Stalin's 9.8. Russia is NOT our friend and NOT a prospective ally. But we have two choices. One is to attempt to bring Putin down and bring in a government we like, and the other is to strike a deal with Putin that we can live with. The first is delusional, but pervasive in a foreign policy establishment that still believes that we can reshape the world in America's image.