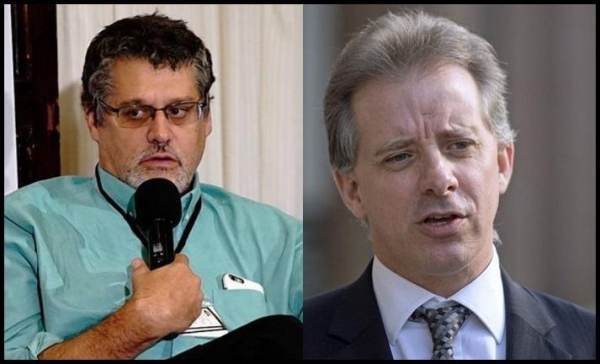 From The Gateway Pundit:


The House report states that in March 2017, Jones told the FBI about a project he is working on with Steele and Fusion GPS that is being funded to the tune of $50 million by 7 to 10 wealthy donors from New York and California.

“In late March 2017, Jones met with FBI regarding PQG, which he described as ‘exposing foreign influence in Western election,’” reads the committee’s report.

“[Redacted] told FBI that PQG was being funded by 7 to 10 wealthy donors located primarily in New York and California, who provided approximately $50 million.”

“[Redacted] further stated that PQG had secured the services of Steele, his associate [redacted], and Fusion GPS to continue exposing Russian interference in the 2016 U.S. Presidential election,” reads the report, which adds that Jones “planned to share the information he obtained with policymakers…and with the press.”

Jones “also offered to provide PQG’s entire holdings to the FBI,” the report says. The report cites a transcript of an interview that Jones gave to the FBI. The transcript, known as an FD-302, is dated March 28, 2017.

This is an important puzzle piece. In the page/strzok texts they directly talk about Toscas interfering with their plans. And Comey directly talked about FBI/SDNY calling Main Justice to ask about status of laptop search warrant. Yes, this is connected.
https://twitter.com/TheLastRefuge2/status/990055547406823424
************
https://twitter.com/ClimateAudit/status/990050394041606144
something new from Comey interview. We knew that George Toscas of DOJ had challenged FBI on slow-walking of Weiner copy of emails, drawing Comey into loop https://twitter.com/ClimateAudit/status/958464791890116608 … , In Baier interview, Comey said that NY FBI agents called DOJ (Toscas) directly ie bypassing McCabe

Earlier this week @SaraCarterDC reported McCabe may have given the stand-down in the Clinton Email investigation somewhere between March-July 2016 and look what we have here? On April 1, 2016 the State Dept. was told by FBI to stop their investigation.
https://pbs.twimg.com/media/Db1fcl8U0AAr2jB.jpg

[interesting related twitter response:
====>"Nope, they were told to stop, to hault, the word “deferred” was used by the State Dept. internally to make people feel better. If “deferring” happens why didn’t Senate and Congress hault their Russia investigation and hand the lead to Mueller?"<====]