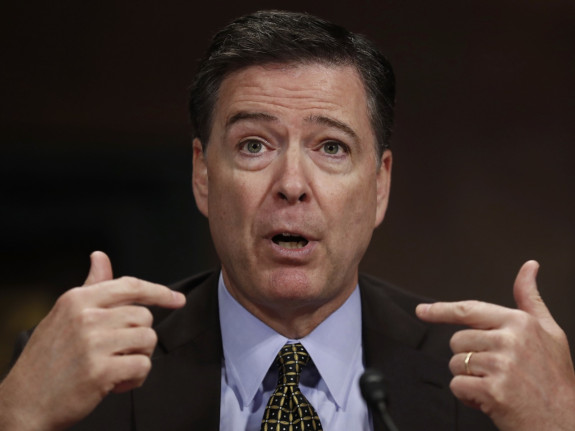 From Ace of Spades

Comey claimed falsely that the Steele Dossier was initially funded "by Republicans." When it was pointed out the Free Beacon said they had funded Fusion GPS but had not paid for the Steele Dossier, he went into his Unfrozen Caveman Lawyer act and claimed he only knew what he saw in the media.

Also echoing Obama, he claimed he did not know that the DNC and Hillary Clinton had funded the Steele Dossier. He claimed he'd only heard that in the media, but did not know it for a fact. Bizarrely, he did not seem to think it was necessary to find out who the actual parties were behind the dossier.

He claimed that it was enough for him to know that political opponents of Trump had funded it. He did not tell Trump about who funded it. Of course, he dismisses this as irrelevant.

He claimed that Cheryl Mills really was Hillary Clinton's lawyer. He also says Mills had been "scrubbed" as a target in the email investigation so I guess whoever Hillary wants in the room with her is fine, so long as Comey's dream team had "scrubbed" her.

He claimed, falsely, that the Steele Dossier was only a minor part of the FISA application and that there was much, much more information included in it. This is false, as Congressional disclosures have shown.

ConservativeTreehouse tweets:
We would all be well served to remind ourselves of another aspect to James Comey's March 20th, 2017, testimony. Watch:

Link to pdf of newly released Strzok and Page emails

17. Convo on May 11th also includes Senator Mark Warner and Richard Burr questions to McCabe etc. With additional convo about Lester Holt interview w/ Trump. Page/Strzok see Holt as on their team: "he did a great job" etc.

20. More thorough picture emerges of who was selecting Robert Mueller's team and why. Andrew McCabe was key player along with James Baker. Reading how this was done blows the entire @tracybeanz Mueller "White Hat Theory" to smithereens.

I watched the entire interview on Bret Baier's show.

Comey is a glib liar. The alternate-universe version of James Stewart in Mr. Smith Comes to Washington.