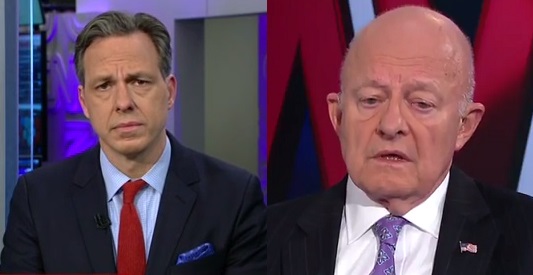 
They noted that when Clapper was initially asked about leaks related to the dossier in July 2017, Clapper denied “discussing the dossier compiled by Steele or any other intelligence related to Russia hacking of the 2016 election with journalists.”

But according to the report, Clapper eventually acknowledged discussing the “dossier with CNN journalist Jake Tapper.”

He also admitted that he may have told other journalists about the dossier.

“Clapper’s discussion with Tapper took place in early January 2017, around the time IC leaders briefed President Obama and President-elect Trump, on ‘the Christopher Steele information,’ a two-page summary of which was ‘enclosed in’ the highly-classified version of the IC,” the Russia report states.

This one goes out from Jake to James.