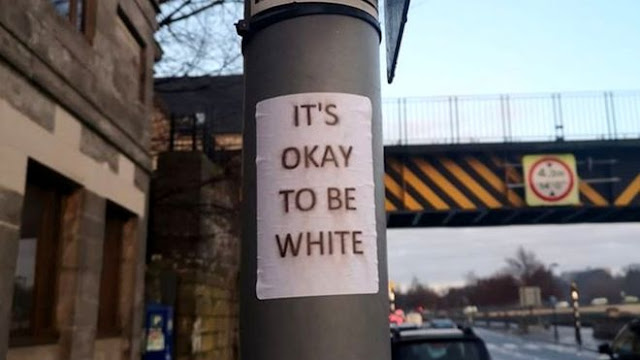 
Scotland’s deputy first minister has condemned the appearance of stickers bearing the slogan “It’s ok to be white” in Perth city centre.

The stickers were posted on lampposts and drainpipes throughout the city at the weekend.

John Swinney, who is also MSP for Perthshire North, said the “atrocious” stickers had “no place in Perth or any other part of our country.”

Police Scotland said it was “currently looking into the matter.”

Posting on Twitter, Mr Swinney said: “We must stand together to resist this unacceptable material.”

Stickers bearing the same slogan appeared in Dundee in September.

The message originally appeared as a 2017 poster campaign in the US organised by an internet message board, with the aim of provoking reactions.

It was later picked up and spread by neo-Nazi groups.

Local group Perth Against Racism said it has been contacted by local people who said the appearance of the stickers had made them feel unsafe.

One person told the group: "I am certainly worried now for my daughters who are not white but are from Perth.

"It's sickening and disgusting to know that people think like this."

Local people feel "unsafe" because there are other people running amok in their city believing crazy things like, "It's ok to be white."

I don't know what we're supposed to take from this; that it's NOT ok to be white?

AND WHILE WE'RE AT IT, IS IT OK TO BE JEWISH?