Erik Rush On Anti-Semitism in America and The Black Israelites 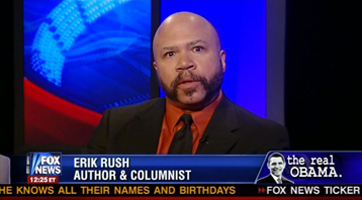 The Dec. 10 shootings in Jersey City, New Jersey, which left six people, including the two gunmen and a veteran detective dead, and which began at a local cemetery and ended at a kosher market, have given rise to many questions and a distinct level of puzzlement among those attempting to process this tragedy.

Officials have described the attack as an anti-Semitic hate crime that is now being investigated as domestic terrorism. As those following the story will be aware, the two shooters, David Anderson, 47, and Francine Graham, 50, are alleged to have ties to the Black Hebrew Israelites, a sect described by the press as a fringe black nationalist group that often disparages whites and Jews.

Matters were further complicated this weekend when a New Jersey man with reported anti-Semitic leanings was arrested after his phone number was found in Anderson's pocket. Ahmed A-Hady, 35, was taken into custody by FBI agents on a firearms violation; a search of his pawn shop safe uncovered over a dozen weapons and hundreds of rounds of ammunition.

Some of the aforementioned puzzlement around this case has its genesis in questions surrounding who the Black Hebrew Israelites actually are, even though it has not been established as to whether Anderson and Graham were members or whether they may have simply embraced elements of this creed.

One of the reasons I decided to weigh in on this is because I knew people who were members of the Black Hebrew Israelites during the 1970s and 1980s in New York. I'll leave it to the reader to decide whether or not my ruminations shed any light on the subject.

Suffice it to say that the information currently available on the Black Hebrew Israelites is vague, as well as being colored by recent events and the lack of information offered by the sect itself. During what is called the "black consciousness movement," which began during the 1960s, many blacks in America struggled with their sense of identity.

As such, there were a lot of young black people who examined alternative paradigms of faith to those with which they were familiar. At that time, the vast majority of blacks had a Christian background, but many wondered if this was still a viable modality for them in light of other aspects of Western society they were inclined to reject.

This was also a time when the political left – which had an overall agenda of subverting societal norms at large – began to co-opt the civil rights agenda.

Black Liberation Theology, an apostate form of communism-infused Christianity, began to take hold in some black churches. On the street corners of black communities, devotees of the Nation of Islam handed out tracts and admonished passersby to abandon "the slave owner's religion."

By this, of course they were referencing Christianity, conveniently ignoring the fact that the slave trade had been essentially run by Muslims on the other side of the Atlantic for centuries. It is a sad fact that due to the institution of slavery, blacks brought to the Americas completely lost their cultural heritage, as slaves were bred with slaves from different regions of Africa, as well as with whites.

Thus, I found many of the new identifications young black people making back then as somewhat incongruous.

As I was growing up, I knew many young black men who changed their names; in fact, I knew a few who changed their names three or more times during a period of five years, each in keeping with the new religion or esoteric African creed they'd determined to follow. It was in this milieu that I was introduced to the Black Hebrew Israelites in the late 1970s.

To be honest, all I can say about them is that they claimed to observe the Jewish faith. Some even learned Hebrew – or Hebrew prayers, at least. In this way, I did not see them as being any odder than any Gentile who determined to convert to Judaism.

I was somewhat taken aback when, in 1979, The New York Times ran a story about the shabby treatment members of the sect were allegedly encountering after having immigrated to Israel.

A few years later, press reports featured some members of the sect from New York (a family friend among them) being denied entry into Israel for a visit. Over 40 years later, I couldn't honestly tell you what the Black Hebrew Israelites believe or what their sentiments are.

The only consistency I see between the people I knew and the rag-tag, quasi-militant, incoherent young "ministers" we now see in press reports is the claim that the Black Hebrew Israelites are the "real" Chosen People – whatever that means.

It is unfortunate that blacks in America have been subjected to every whimsical social construct that political opportunists, charlatans and social engineers have devised. It is even more unfortunate that, as a function of the trauma and ignominy suffered by blacks, many fell prey to these designs.

As anyone who has been a regular reader of this feature will be aware, the creed of the Nation of Islam (for example), one of the more successful religious organizations to come out of the Civil Rights Movement era, is almost entirely made up. I would suspect that the doctrine of the Black Hebrew Israelites is no less fanciful.

Muslim brother of ISIS terrorist who infiltrated American Airlines as


"An American Airlines mechanic accused of sabotaging a navigation system on a Miami flight with 150 passengers aboard pleaded guilty Wednesday to attempting to destroy the aircraft in a plea agreement designed to avoid a maximum sentence up to 20 years in prison.
“I do admit the guilt,” Abdul-Majeed Marouf Ahmed Alani, 60, said through an Arabic interpreter in Miami federal court.
Alani, a veteran AA employee who had lived in California and commuted to his job at Miami International Airport, now faces up to three years in prison under a joint recommendation by the U.S. Attorney’s Office and his defense lawyer. His sentencing is set for March 4.
Read more here: https://www.miamiherald.com/news/local/article238483208.html#storylink=cpy