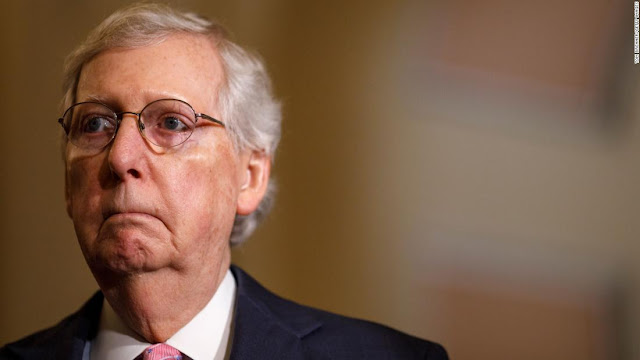 "This Is My Resolute Face. How's It Look?"
"Not Exactly Resolve Manifest, Sir, But We'll Go With It"


Mitch (McConnell) is in the driver's seat and he is not happy about any of this. Despite his laconic, almost soporific delivery, the half hour speech that he gave in response to the impeachment is one of the most important ever given by any politician, IMHO.


The often underestimated McConnell gave the speech of his life on Thursday. In approximately half an hour, Senator McConnell did what so many Democrats have claimed to do over these last several weeks: He meticulously applied the Constitution and historical precedent to the facts at hand and to the articles of impeachment the House passed on Wednesday.

McConnell’s speech is both educational and wickedly fun to watch. Let’s start with the fact that Washington Democrats made up their minds to impeach President Trump since even before he was inaugurated. Here’s a reporter in April of 2016—April of 2016! “Donald Trump isn’t even the Republican nominee yet. But impeachment is already on the lips of pundits, newspaper editorials, constitutional scholars, and even a few members of Congress.”

Justifications for impeachment included rude behavior to professional athletes and reporters, changing Obama’s policy on transgender in the military. “A few months ago,” McConnell added, “Democrats’ three-year-long impeachment in search of articles found its way to the subject of Ukraine. House Democrats then embarked on the most rushed, least-thorough impeachment inquiry in modern history.”

McConnell then contrasts the “Get Trump” effort to the “mountains of evidence” gathered in both the Nixon and Clinton processes. The Nixon impeachment process required 14-months of hearings in addition to a special prosecutor. The Clinton impeachment followed years of an independent counsel investigation.

“House Democrats’ rushed and rigged process produced two articles of impeachment [which] are fundamentally unlike any articles that any prior House of Representatives have ever found,” McConnell explained. Article I involves the “timing of aid to Ukraine.” But the articles do not even purport to allege an actual crime. “Instead, they deploy the vague phrase ‘abuse of power’ to impugn the president’s actions in a general and indeterminate way.”

The Democrats might not be required to allege a crime, but McConnell warned, “history matters and precedent matters. And there were important reasons why every previous House of Representatives in American history restrained itself . . . from crossing the Rubicon.”

The vagueness of the “abuse of power” article is effectively a “mal-administration” charge rejected by the Constitution’s Framers because it would so easily be used to attack presidents over policy differences. If the Democrats are successful, all presidents henceforward will be impeached whenever the opposition party achieves power in the House.

“So there were powerful reasons why every House of Representatives for 230 years . . . required presidential impeachment to revolve around clear, recognizable crimes,” McConnell said. “That 230-year tradition died last night.”