Epstein Didn't Kill Himself And ... 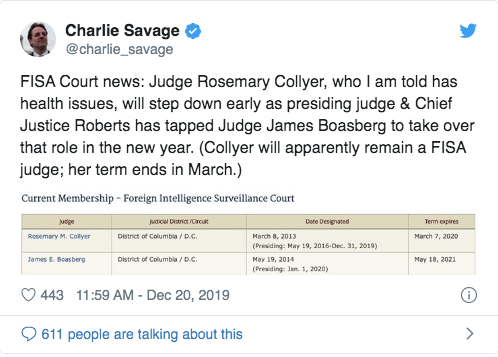 Will no one rid me of this turbulent Priest?


On Tuesday Rosemary Collyer, the presiding judge on the Foreign Intelligence Surveillance Court (FISC), rebuked the FBI under Director James Comey for the abuse of the FISA Court.

“The FBI’s handling of the Carter Page applications, as portrayed in the [Office of Inspector General] report, was antithetical to the heightened duty of candor described above,” Collyer wrote.

“The frequency with which representations made by FBI personnel turned out to be unsupported or contradicted by information in their possession, and with which they withheld information detrimental to their case, calls into question whether information contained in other FBI applications is reliable,” she added.

The FBI hit Collyer back with a weak response and claimed Director Wray “has ordered more than 40 corrective steps to address the Report’s recommendations, including some improvements beyond those recommended by the IG.”

And now she’s stepping down early from her post.

JOHN ROBERTS IS A CANCER!