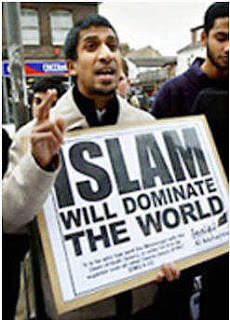 Islam of the late 20th and early 21st centuries is a cruel, bloody, cowardly butcher's religion. So long as Islam maintains this character, all good and free people must be at war with Islam.

Think about it. If three Islamic fighters had been captured by the Americans, would there be any apprehension about their fate? Of course not. Despite all the fervid Abu Ghraib and Gitmo propagandizing of assorted leftists, pseudo-peaceniks and Democrat apologists, the general presumption is they would be treated decently.

But as soon as the news of the disappearance of these three American soldiers was released, the presumption was for the worst. For in the twisted world of Al-Qaida and its spawn of Islamofascists cruelty is first and second nature.

This hate-fueled cruelty feeds on itself, grows and intimidates by its certainty. Where are the imams who will speak against it? Where are voices for Allah the "merciful" as these soldiers' lives hang in the balance? If they are not secretly sympathetic to it then they are shut up, intimidated, muzzled by the certainty of a hateful cruelty; a revenging cruelty that seeks out all who would oppose or protest it.

There is nothing else certain in the world of Al-Qaida and radical Islam but this great cruelty. It is not merely a capacity for cruelty; it is intrinsic, organic cruelty.

Not all muslims are bloody cruel and cowardly murderers. But enough are to highlight the religion itself as the core of the problem. The religion requires reforming, to enter a more civilised age. So long as Islam refuses to reform and accept other religions in peace, good people in the world must war with Islam.