You would think there are things to discuss 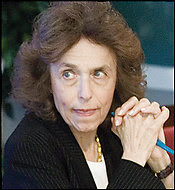 Fanny Esfandiari, a 93-year-old great-grandmother with heart disease and bad eyesight, made a desperate trip to Iran's notorious Evin Prison earlier this month.

"I have to find my daughter," she told relatives reluctant to drive her. None thought it would be productive -- or worth the risks. A nephew finally agreed. He stayed in the car as Esfandiari slowly shuffled on her cane up to the hulking white stone compound in Tehran where Iran's kings and theocrats have incarcerated their most famous political prisoners as well as their toughest criminals.

Esfandiari asked to see her daughter, Haleh Esfandiari of Potomac, a scholar once described as the "gold standard" of Middle East analysts, who was detained by Iranian intelligence on May 8.

The elder Esfandiari was told to try the prison's high-security wing -- the infamous Ward 209. There, however, she was turned away, and slowly made her way back to her nephew's car.

Not a word from Condi, Ryan Crocker (who met with these racist criminal thugs this week)?

The proposed next round of nuclear talks between Iran's nuclear negotiator Ali Larijani and European Union foreign policy chief Javier Solana has been postponed.

The talks were scheduled to take place on May 31 in a European country.

But there really is no use, is there?

Continue reading "You would think there are things to discuss" »