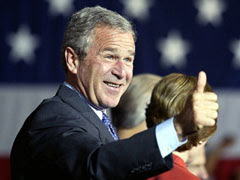 Bush Says
Amnesty Bill
Will Reduce
The Need
For A Fence

“When you grow up in Texas like I did, you recognize the decency and
humanity of Hispanics. And the truth of the matter is, a lot of this immigration
debate is driven as a result of Latinos being in our country,” he said. “I have
seen firsthand the beautiful stories of people being able to take advantage of
opportunity and make solid contributions to our society.”

He said Americans had nothing to fear from large-scale immigration
from Latin America.

“There is an element of our society that is worried about
two Americas,” he said. “Our ability to welcome newcomers and the
system’s capacity to assimilate them has been one of the great powerful
traditions of America. It works, and it will work this time. People shouldn’t
fear our capacity to uphold our motto: E Pluribus Unum.”…

Addressing one of the most sensitive issues in the measure, Bush expressed hope that the changes would reduce the need for a fence
along the border with Mexico…
The proposed fence has drawn protests
in Texas, where officials fear it will hinder commerce and cause environmental
problems.

“The fence sends a clear signal that we’re serious about enforcing
the border,” Bush said. “A lot of these ranchers down there are saying,
`Wait a minute. Bad idea.’ I presume we’re not going to build a fence on places
where people don’t want it.”

Ok, so the overwhelming number of Americans want a fence built, and we're going to let the objections of a few ranchers deny the will of the American people?

What the fuck kind of sense does that make?

And, I would swear that just a couple days ago we were being told that this new amnesty bill provides for the fence to be built. Now, Bush is saying he hopes it will reduce the need for a fence?

We the people of the United States of America have the right to a government which enforces our laws. The government that ignores the will of its people puts itself in a precarious position.
Posted by Pastorius at 6:32:00 pm