The Hugh Grant Of Pseudostine? 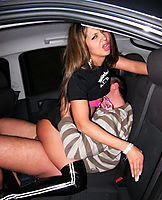 This is too funny! I guess that Arafat's "sacred" burial site didn't bring the fellow too much good will from Allah:

According to Israeli security officials and Palestinian sources in Ramallah speaking to WND, the terrorist was arrested while having car sex just a few hundred feet from late PLO leader Yasser Arafat's gravesite.

According to Israeli security officials and Al Aqsa Martyrs Brigades sources in Ramallah, Shawish was arrested after the Israeli police stormed his jeep, which was parked in a lot outside the Muqata, about 200 feet from Arafat's grave. The sources said at the time of his arrest, Shawish was having intercourse in the back seat of his jeep with a Palestinian woman, whose identity is being withheld by WND. The woman was not his wife.

The Brigades, founded by Arafat, largely considers the late PLO leader's resting place to be a sacred site.

hey there seen your comment about the muslim compound in coldwater,mi and I know exactly where it is at and have been there myself a few times. If you have any questions email me at ogronc2004@yahoo.com