What? No "Panties On The Head?" 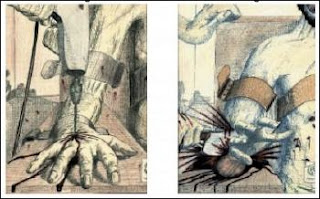 While a lot of people who apparently don't get out a lot railed and screeched over Abu Ghraib's famed "panties on the head" abuse of prisoners, very few of these pseudo-intellectuals can be bothered to comment about the genuine bloody torture that is occurring on the battlefield of the Long War.

The Smoking Gun describes the instructions contained in an al-Qaeda torture manual found by US troops in a raid on a safe house in Iraq. (Warning graphic drawings)

In a recent raid on an al-Qaeda safe house in Iraq, U.S. military officials recovered an assortment of crude drawings depicting torture methods like “blowtorch to the skin” and “eye removal.” Along with the images, which you’ll find on the following pages, soldiers seized various torture implements, like meat cleavers, whips, and wire cutters.

What? No humiliating body searches by women or the disrepectful handling of Korans?

Silence on Torture: Silence is complicity, you know. (Instapundit)

For somebody who loves torture stories to death, there’s lots of silence about this from Andrew Sullivan who’s busy slamming Catholics, sniffing out homophobia, rooting about with Ron Paul and showing the view from somebody’s window. It’s just work, work, work, for Andrew.

“Given the media’s fascination with what American soldiers were doing at Abu Ghraib, is it safe to assume that the same level of attention will be given to what our enemy is doing? Or, would that be too much like journalism?” (Newsbusters)

The media, and the less bright bloggers, appear to be fixated on the exaggeration of the sins of coalition forces, and completely blind to the actual horror that is being faced by the western world. These self-lobotomised bloggers and journalists were all over Abu Ghraib, but since looking at the real threats to civilisation might upset some of their "readers," they choose to ignore the real problems.

Ayatollah Khomeini said from his
grave, "Abdul, your future is a
Suicide Vest, but the truth is...
we are running out of Virgins!"

Read, "Back From the Sand-Box", then tap the Open Forun Comment Section, reb

Oh, I bet John McCain would have something to say about this!

"If don't want our people tortured, we shouldn't torture."

Or however he said it.

The enemy are not decent human beings, they will always do horrible things to the people the capture.

I don't want our troops out there mutilating and murdering our captives, but come on, these are animals we are fighting...

Call a spade a spade.

The msm's silence about the REAL torture is pissing me off!