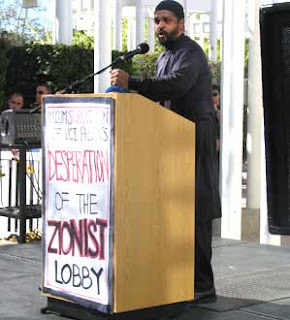 That is my opinion, Infidels.
Check out this story and tell me these UCI Muslims aren't behaving in such a way that betrays absolutely no concern or fear of the law. Why would that be? Presumably, the Muslim Student Union would be concerned with portraying a positive image of Muslims. But no.

Instead, these Muslim students surround a FBI car and throw a cinderblock at it?

An FBI agent confronted by a Muslim student at the University of
California, Irvine, earlier this month was trying to get a closer look at a
“suspicious” truck at the time, federal authorities said Sunday.

The agent had followed the truck to the campus from a separate
location as part of an investigation that was unrelated to the school or student
activities, bureau spokeswoman Laura Eimiller said. “The investigation the
agents were engaged in had nothing to do with the UCI campus or student
activities there,” she said. [Why not? Monitoring the activities of radical
Islamic front groups is exactly what the FBI ought to be doing. —ed.]

The FBI’s response comes after a Muslim student said an agent
bumped him with his car near the site of an anti-Israel protest on May 14.
Yasser Ahmed, 21, said he noticed he was being followed by a car with blackened
windows as he drove a 24-foot moving van on campus to pick up an exhibit,
sponsored by the Muslim Student Union, that protested Israel policies in
Palestine. [Unbelievable. Speakers called Jews “Nazis,” called for jihad and
martyrdom, and spread sick antisemitic conspiracy theories and Holocaust
denial—and Bakersfield.com calls it “protesting Israel policies” in a
nonexistent country. Could they possibly be any more biased and misleading?
—ed.]

After he got out of the truck and asked the driver to identify
himself, he claimed the driver then revved the engine and began pushing Ahmed
back with the front bumper before driving off. ...
The FBI said the incident occurrent on a dead-end street after a group of people surrounded the car of one
agent.


It’s astounding that the FBI let these students get away with this
outrageous behavior. Maybe it’s a result of all those CAIR-sponsored sensitivity
training sessions.

Yes, it is astounding, but it isn't surprising. This incident, like the Six Flying Imams Incident, betrays the Modus Operandi of Muslim organizations. They speak the language of human rights in order to soften up the authorities, and then behind the scenes (in my opinion) they instigate trouble, which the authorities will then feel helpless to react to as they have been tirelessly educated of the peaceful intentions of Muslim organizations.

The fact that they have now, in my opinion, moved on to instigating actual violent acts against law enforcement officials indicates that we are getting closer and closer to war.

That sounds like a paranoid conspiracy theory, doesn't it?

Well, perhaps, but the truth is the Muslim Student Association is a branch of the Muslim Brotherhood, which functions as a political party promoting Jihad in Muslim nations throughout the world. Likewise, the Council of American-Islamic Relations (CAIR) is a branch of Hizbollah, the Iranian-funded militant-political party operating our of Lebanon.

I believe it is clear that this is a coordinated attack.

Sooner of later, the Infidels are going to have to start pushing back, or our entire civilization will be routed.

I speak peace when peace is spoken
But, I speak war when your hate is provokin'

Meanwhile, the FBI guy really got hit by a cinderblock.

Sorry you had to go through that at your school.

A great way to get the message out at www.badgrafix.com
Flying Imams T-shirts.