What Does That Tell You About Most Muslims? 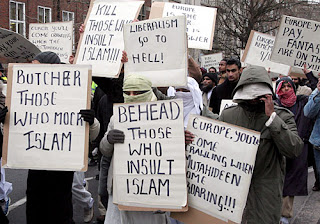 A reader emails:
I recently discovered your blog, and appreciated your difficulty in remaining a Muslim after 9/11. I was wondering what you think of something they had at Hot Air recently about Zuhdi Jasser (link). He said the solution to Islamic terrorism is to bring the terrorists back to their faith, and that his Islamic faith has been what has solidified him in his position against terrorism. Hearing a Muslim say something like that was like a breath of fresh air to me, but I wonder how widespread it is, and how really Islamic such an attitude is.
This question requires a careful answer because we have to separate the means and the goals of the Islamic terrorists.
Let me put forth a few statements that I think are true. They range from one extreme to another:

As one can see, terrorism is a small part of the problem. The major issue is the fusion of religion and politics in Islam. The global Muslim community (the umma) does wish for a grand theocracy

That's certainly not comforting. Most Muslims won't openly support Al Qaeda or its derivatives but then what about sharia? Sharia is made up of retrograde, superstitious and barbaric laws. It, by its very nature, requires force and coercion.

Just take a brief look at the heart of Sunni and Shia Islam.
Saudi Arabia:

All these laws are considered legitimate because they're derived from Islam.
Though, one can say that Saudi Arabia and Iran are, somehow, twisting sharia. My response to that: Muslims went nuts over a few drawings in a once-obscure Danish newspaper. Over a hundred people died in the ensuing carnage across the world. One would think that hundreds of millions of Muslims would be shocked, horrified and disgusted by how their, supposedly, peaceful religion is being perverted in these two nations. Yet, do we even see one percent of the cartoon outrage on this matter?
What does that tell us about Islam and most Muslims?

Yeah, and what does the following video tell you?