EDL THREATEN TO “CLOSE YOUR TOWNS” OVER XMAS BANS

From the Daily Star, via Vlad Tepes: 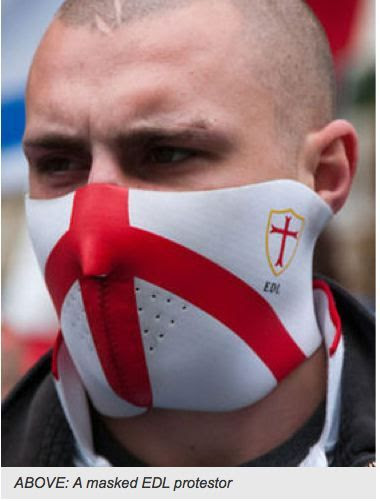 A FAR-RIGHT group has vowed to “close down” any town that ditches British traditions and shows favouritism to Muslims.


The English Defence League said it has written to every council in the country threatening a mass invasion if they ban the word “Christmas”.

EDL leader Stephen Lennon said “working class people” in the UK were “at boiling point” over what he says is the “Islamisation of Britain.

His declaration comes after yesterday’s Daily Star poll found 98% of readers fear that Britain is becoming a Muslim state.

He said: “If the politicians aren’t going to stick up for us, we will make them, because we will cause so much fuss and so much noise they are going to have to listen.

“We will not back down or be beaten into submission. We don’t care if you call us racists. We are coming anyway. We are going to continue doing it until someone listens.”

The EDL was set up last year after Islamic extremists hijacked a homecoming parade for British troops in Luton, Beds.

On Sunday more than 250 EDL members joined US activist Rabbi Nachum Shifren at an anti-Palestine demo outside the Israeli Embassy in London.

Jews, Gays and Hindus looking to EDL for protection against Islam: http://crombouke.blogspot.com/2010/01/english-defense-league.html

Don't just "close it down". Make it the biggest Christmas party the place has ever seen, a real celebration, protected by the EDL but not micro-managed by them.

Then get some nice video of the Muslims screaming and threatening that. Or just whining and slinking away.

Violent Muslims try to shut down a Halloween store.

This week in history-Charles Martel: Turning Back the Islamic Tide

This week marks the anniversary of an epic event that’s no longer commonly known but which nonetheless shaped the future of the Western world, and which may still hold inspiration for the West today.

I was wondering when Jihadists would start violently attacking Halloween.

The Jihadists are attacking Halloween---and the EDL is attacking Christmas! I mean, what is this talk about invading English towns? Invasions are what you do to enemies, and, while I don't like the banning of the word Christmas, what about the ordinary people who live in these towns? Are they supposed to appreciate that the EDL is saving Christmas for them when they shut their towns down?

I can't imagine that most of they would appreciate it.

So, what is the point of the EDL doing it? Aren't they supposed to be the supporters of ordinary British citizens? Why do something most of them will hate?

Why are you asking me? I'm not a member of the EDL.

Well, you're running the story. You must have some opinions about it! Or are we just supposed to bob our heads approvingly, or numbly, mumbling, Chee, how innaresting, when the EDL threatens stuff like this? We're not supposed to speculate, or be shocked?

I posted it because I think it is interesting that the EDL thinks that the government is trying to suppress the use of the word Christmas out of political correctness.

I am American. I am not English. I don't know whether this is true or not. And, if it is true, I'm not sure how I feel about it anyway. It seems to me the government ought not be in the business of promoting any religion. That's what our First Amendment is about.

However, the English government is in the business of promoting the Anglican Church. So, why is it they are suppressing Christmas, if they are?

If they are, indeed, suppressing Christmas, then it is hypocritical to the extreme. And, to do it out of respect to Islam is ridiculous. You guys ought to be figuring out how to suppress Islam, if you ask me.