US analyst  Edward Spannaus of Executive Intelligence Review says President Barack Obama is unlikely to finish his first term as there are serious efforts by American officials to remove him due to his incompetence.

PRESS TV Spannaus claims that people inside the White House say, “Once he got into the White House he is very unhappy having to govern … he is very frustrated, he is very depressed, some reports say he is on medications and he cannot concentrate or focus, which is a mental problem.” 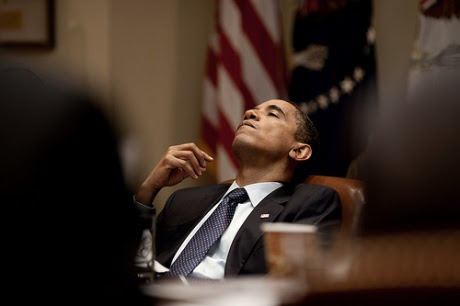 “It is very doubtful at this time that he will last his first term,”  said in an interview with Press TV on Wednesday.
“There are people who are upset within the administration and the Democratic party who are seriously considering how to remove Obama from presidency,” Spannaus added. Many of them put out all their calls for removing Obama under the amendment 25th of the US Constitution. The amendment allows for the removal of the US president if he is incapacitated either physically or mentally.
Spannaus also opined that people in the military are upset because Obama “is not attentive” to what is going on. “We have troops killing and being killed and he is not interested in dealing with it,” he further explained.

Click on the title to see the video at Bare Naked Islam.
Posted by Pastorius at 2:03:00 am

Goes with some of the rest of what we've been hearing. The results of next Tuesday should make our pouty little community organizer even more restless. But what would it take to actually get him out of there before 2012 and would it literally be -- or cause -- more trouble than it would be worth. Better to just let him fester for another couple of years so the voters in 2012 won't have any excuses left?

Apparently bringing down a nation as great as America is not quite as simple as first presumed, even if you do happen to attain the office of the big head cheese.

If America does ultimately survive the Obama rationality lapse, she might just emerge stronger than ever before.

Like anon above states, sometimes, when we take what we have for granted - it takes facing the threat of loosing what was bequeathed to us through the blood and sacrifice of prior generations to realize liberty is not a universally accepted entitlement and it takes intensely focused effort to keep liberty secure.

If there is one positive in this painful lesson, I've personally learned this is a battle which each of us much address or suffer the consequences. Learn, cherish and jealously guard your history, heritage and culture.

Vote your conscience on Tuesday. Make our founding father's efforts count for generations to come.

that guys boss is lyndon larouche?

I had the same thought, rumcrook. EIR is supposed to have a very good intelligence team, but if it's run by the larouchies it is suspect from the start.

The information leaks from the "former WH insider" about a Chicago-linked political scandal about to go off in Obama's face may be more reliable.

Thanks for pointing that out.