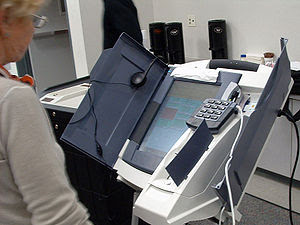 Man said he voted straight-party ticket and got opposite results

A Craven County voter says he had a near miss at the polls on Thursday when an electronic voting machine completed his straight-party ticket for the opposite of what he intended.

Sam Laughinghouse of New Bern said he pushed the button to vote Republican in all races, but the voting machine screen displayed a ballot with all Democrats checked. He cleared the screen and tried again with the same result, he said. Then he asked for and received help from election staff.

"They pushed it twice and the same thing happened," Laughinghouse said. "That was four times in a row. The fifth time they pushed it and the Republicans came up and I voted."

M. Ray Wood, Craven County Board of elections chairman, issued a written statement saying that the elections board is aware of isolated issues and that in each case the voter was able to cast his or her ballot as desired.

Chuck Tyson, chairman of Craven County GOP, remains skeptical. He has been communicating with Wood about the issue and was invited to a meeting Wednesday with state elections officials. There were no further details about that meeting.

"Something is not right here," Tyson told the Sun Journal. He said he "got two or three calls" from people describing the same problem while they were voting.

Soon the only thing that will convince anyone are signed paper ballots matched one by one with voter rolls, with Dem and GOP representatives present during counting of every vote.

The gavones who are farting around here, if this isn't incompetent software, need to consider what they are constructing .. the DESTRUCTION of confidence in the system. Or IS THAT THE POINT?

POSTED: 9:49 pm PDT October 25, 2010
LAS VEGAS -- Some voters in Boulder City said they are concerned about fraud at the electronic ballot box.Voter Joyce Ferrara said when they went to vote for Republican Sharron Angle, her Democratic opponent, Sen. Harry Reid's name was already checked.Ferrara said she wasn't alone in her voting experience. She said her husband and several others voting at the same time all had the same thing happen."Something's not right," Ferrara said. "One person that's a fluke. Two, that's strange. But several within a five minute period of time -- that's wrong."
Posted by Epaminondas at 3:06:00 pm

Hi Epaminondas.
Exactly what i was expecting is happening.

Voting machines should be outlawed. This is our American Democracy. Take the time to do it right.

If we must use machines, they must produce a paper ballot, not an electronic result. The ballot must be human readable so the voter can examine it to ensure it contains the voter's intent.

Most definitely concur SF. It must be available for recount.

Wow, so the default programming will automatically cast a ballot for the Democrats if the voter intended to leave a race blank? I suppose some programmer thought he is being "helpful" to pre-populate the screen.