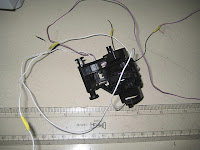 Parts of a printer which was contained in a package intercepted by Dubai security officials. The US-bound parcel contained a bomb hidden in a printer and bore the hallmarks of al-Qaida, Dubai police said


Sophisticated bombs contained in packages sent from Yemen were designed to explode in the air and bring down the cargo planes carrying them, UK security officials have confirmed.

Intelligence experts believe the use of the devices, contained in printer cartridges despatched on two Chicago-bound cargo planes, represents a shift in terrorist tactics to commercial targets.

One of the devices was linked to a mobile phone, while the other was attached to a timer. The Observer understands that the East Midlands device was so sophisticated an initial examination by forensics experts initially suggested it did not contain explosives.


"Even when it was examined, the sniffer dogs couldn't detect it," a security source said. "It was only when they [forensics experts] had a second look at it they realised what it was."[Emphasis mine..ed]


Yemen often initially blames the deranged loner. For example, the recent murder of a French engineer was said to be a personal matter, however the murderer was later found to be a member of the Yemeni security forces as well as an associate of Anwar al Awlaki.


Yemen Post: According to a senior governmental official who spoke to Yemen Post on anonymity, Yemeni security forces arrested two Yemeni women under suspicion of sending the packages to the United States.

The Yemeni official claims that the two women sent the packages in order to damage the reputation of Yemen and not on links of Al-Qaeda. He denied that Al-Qaeda had links to the packages that were sent.

The source confirmed to Yemen Post that the two ladies are believed to have tried to send the packages to Jewish schools in the United States.

At the same time, Yemen predictably began a duplicitous media campaign for internal consumption denying the bombs shipped from Yemen.

Well, that answers the why-the-hell-were-they-sending-package-bombs-to-synagogues-from-Yemen question. They weren't. Guess the addresses were a sick joke.

Har. All of Islam is a sick joke.

Maybe even sicker than you think.

What with the election on the horizon, could this be Obama's October surprise?

David Cameron 'not informed of bomb threat for 18 hours'
Barack Obama is thought to have known about the threat of terrorist activity at East Midlands Airport 18 hours before the prime minister.
*******************

endorsed Obama in 2008, only to find themselves defending controversial endorsement given,
Quote: "Mr. Obama’s statement that federal supervision of the union had run its course."
. . .one hand washes the other . . .a political favor in return for a political favor?