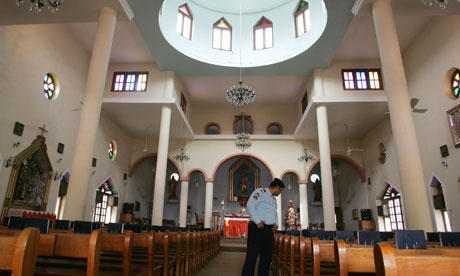 Iraqi Policeman inside Our Lady of Salvation Chaldean Catholic church, after security forces have stormed the building

This is an update on this story:
At least 10 Christian worshippers were killed and about thirty wounded tonight, when Iraqi security forces stormed a Baghdad church in which terrorists wearing explosive vests were holding them hostage.
The raid also killed seven Iraqi soldiers and police officers. The violence erupted just after 9pm, almost four hours after a group of between six and eight gunmen wearing military uniforms stormed Our Lady of Salvation Chaldean Catholic church in the inner-city suburb of Karrada.
Worshippers caught up in the carnage described their ordeal to the Guardian as they fled the church. They said the terrorist attack was heralded by a car bomb outside the fortified church gate at 5:30pm. The two priests, who were about to begin mass ushered at least half of their 120-strong congregation to a small room in the back of the ornate building, in a bid to protect them.
"After a while one of the terrorists opened the door and threw in a bomb," said a man who identified himself as Bassam. "There were injuries. They killed people, they injured people," he said, before collapsing on the road outside the church. "Where is our father?" he screamed," referring to his priest. "Where is our father?"
More here.
Posted by Claudia at 10:47:00 pm

Why the hell does there have to be a dome in that church? To get it ready for when the muzzies take over?

All Catholic churches for centuries have had domes: here. That has nothing to do with Muslims, it has to do with Roman bassylica, which was the model Christians used for their early churches.

PS: It's incredible that, when someone is speaking about so many people died while praying, everything that you comment on, is that. :(